East African Community Headquarters, Arusha, 7th September, 2018: Millions of East African women will be left behind if Kiswahili is not included in the languages to be used by the 50 Million African Women Speak Networking Platform. The 50MWS Project aims at contributing to the economic empowerment of women through the provision of networking platforms to access information on financial and non-financial services so that they can start, grow or scale up their businesses.

At the opening of the workshop, Ambassador Dr. Kipyego Cheluget, COMESA Assistant Secretary General, assured the AfDB that the 50MWS project will be implemented for the benefits of all women.

Amb. Cheluget said that the different implementing RECs had held consultative meetings with their stakeholders to gather their views on how they want the project to be implemented.

‘’This is an opportunity for us to utilise the feedback from our partners,’’ Ambassador Kipyego said.

“This project comes when RECs are moving towards Digital Economic Integration, towards the full adoption of digital technologies with the objective of establishing seamless processes across the RECs Partner States to enable ease of doing business/trade and to enhance regional integration using ICT as a tool,” Amb. Kipyego added.

Amb. Kipyego urged the participants to volunteer ideas that would assist the consulting firm to create user-friendly platforms that could easily be accessed by women entrepreneurs.

The COMESA official suggested that the ideal platform should have unique features differentiating it from other multiple social media platforms that were already in existence.

Ms. Mary Makoffu, EAC Director of Social Sectors and head of the EAC delegation to the workshop, said in her opening remarks that the project was being implemented at a time when the EAC Partners States were rolling out instruments of Digital Trade to minimize physical barriers to trade in the reion.

For more information please contact:
Achel Bayisenge,
Content Manager for the 50MWS Project
Tel: +255 786726230;
Email: This email address is being protected from spambots. You need JavaScript enabled to view it. EAC Secretariat delegation targeted key Ministries partners to the project, including the Ministries of Gender, ICT, Trade and Ministries in charge of EAC Affairs in each Member State. EAC delegation also met stakeholders from Civil Society, NGOs and UN Agencies.

“50MWS is an online platform that will provide financial and non-financial information to women entrepreneurs for them to interact and grow their businesses’,” Mary Makoffu, the EAC Director of Social Sectors and head of the EAC delegation explained.

“We have already existing platforms of women in business across EAC and we want to partner with them and build on the existing structures to better deliver on this project,” Ms. Makoffu said.

50MWS is being implemented in three different economic regions (RECs) including EAC, COMESA and ECOWAS. This is a good opportunity for women in business in respective RECs to penetrate markets of other RECs, EAC head of delegation considers.

After the consultation meetings the EAC Secretariat wants to continue and work with Member States to form country teams that will help in collection of information to upload into the platform. The Ministry of Gender in each country will be in charge of coordination.

Partners from all member states met, said to be excited and promised to give a full support to this innovative project.

A lot is being done by Member States to promote women’s economic empowerment despite some challenges; Gender Ministries’ representatives in each Partner States explained.

All stakeholders met are confident that the contribution of the 50MWS Project on the top of already existing efforts; will contribute to reduce to zero gender inequalities that were observed across the countries.

Meeting attendants expressed some concerns that can prevent the project from achieving its goal; those include the weak smart phone penetration in most of EAC countries and the sustainability of the Project.

The EAC Secretariat finds these concerns relevant but assured them that EAC has developed a communications Strategy to make sure that even the women using the feature phones in the rural areas are reached by information circulated by the platform.

On the concern of sustainability, Wilson Muyenzi, the 50MWS Project Coordinator says that COMESA, the Project coordinating REC, is commissioning soon studies, to come up with mechanisms of sustainability.

“Once our women will be economically empowered, the capacity of our countries will be doubled, and economic development will be a reality,’’ Mary Makoffu, EAC Director of Social Sectors constantly explained to Stakeholders met. 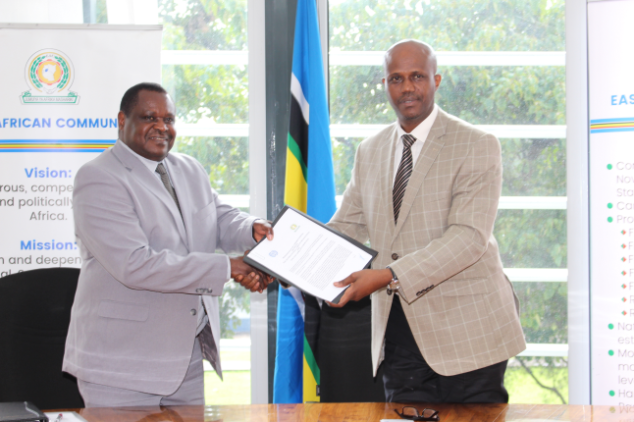 The East African Community and the International Labour Organization Thursday signed a Memorandum of Understanding (MoU) aimed at improving the work environment in East Africa.

The MoU which was signed at the EAC Headquarters in Arusha, Tanzania by EAC Secretary General Amb. Liberat Mfumukeko and Mr. Wellington Chibebe, the Director of the ILO Country Office in Dar es Salaam, Tanzania will, among other things, address issues such as youth employment, extension of social security, and Gender Equality and Empowerment of Women at the work place.

The MoU is a follow up to another one that was signed between the two organisations in 2001. The 2002 MoU enabled the EAC and ILO to develop and launch a five-year East African Decent Work Programme (2010-2015).

Amb. Mfumukeko said that the revised MoU provides for the development of a framework for the harmonisation of the EAC Partner States’ policies on social security in line with the ILO Convention on Social Security (Minimum Standards) No. 102 of 1952.

“The MoU further provides for the expansion of micro, small and medium enterprises for employment creation. Also included is the development of an EAC labour migration policy as one of the facilitators of labour mobility in the Community,” said the SG.

Amb. Mfumukeko said the Community was striving to address youth unemployment as a matter of priority, adding that having well educated but unemployed youth out of work was a time bomb.

He disclosed that EAC Partner States were addressing the issue by seeking to make agriculture as an attractive income generating venture for the youth.

Noting that matters of Entry/Work Permit/Residence Permit have an impact on the immigration function in the Partner States, the EAC Secretariat would convene a joint meeting of the Chiefs of Immigration and Directors of Labour before June 2018to finalize the harmonization of Entry/Work/Residence permits.

A meeting of technical officers from EAC and ILO held from 30th April to 2nd May, 2018 agreed to enhance collaboration in the implementation of a two-year project towards the extension of social security benefits to migrant workers in the EAC.

In his remarks, ILO Country Director Wellington Chibebe said that his organisation would work with the EAC to accelerate regional integration and at the same time ensure that the drivers of integration, that is the free movement of labour, goods and services enhance livelihoods of the millions of working women and men and their families.

“We welcome the signing of this new Memorandum of Understanding, which will be based firmly on a new DWP for East Africa, addressing strategically prioritized areas agreed upon by the ILO on one side and the EAC and the East African social partner organisations on the other side,” said Mr. Chibebe.

Mr. Chibebe said that giving financial assistance to the needy instead of equipping them with vocational skills was akin to creating culture of perpetual dependency.

EAC and ILO signed a Memorandum of Understanding on 18th January, 2001 in which both parties agreed to consult each other with respect to planning and execution of programmes. The programmes include: pursuit of policies and of employment aimed at creating an environment for the development of the private sector and employment; facilitate labour mobility; harmonisation of labour legislation; promotion of fair labour practices through social dialogue and observance of fundamental principles and rights at work; social security and productivity improvement.

In 2010, the EAC and ILO developed and launched a five year East African Decent Work Programme (EA-DWP 2010-2015) which focused on three areas:

(i)     Youth employment by creating a conducive policy environment for the youth and the self-employed, skills improvement and supporting entrepreneurship activities;

The International Women’s Day is held annually on March 8 to celebrate women’s achievements throughout history and across nations. It is also known as the United Nations (UN) Day for Women’s Rights and International Peace. The UN drew global attention to women's concerns in 1975 by calling for an International Women's Year.

As provided for in Articles 121 and 122 of the Treaty for the Establishment of the EAC, Partner States have undertaken various efforts to enhance the Role of Women in Business and Socio-Economic Development.

The EAC Partner States recognise that women make a significant contribution towards the process of economic transformation and sustainable growth and that it is impossible to implement effective programmes for the economic and social development of the Partner States without the full participation of women.

To this end, the EAC has put the inclusion of women and girls at the centre of development programmes with Partner States ensuring affirmative action, constitutional and legal reforms, development of national gender policies; institutional mechanisms for implementation and accountability; economic empowerment measures, and sector-specific policies.

The EAC Secretariat is therefore committed to have a Community where women can participate as equal partners, decision makers, and beneficiaries in the development of their societies.

Celebrations at the EAC Headquarters:

This will feature talks and presentations: