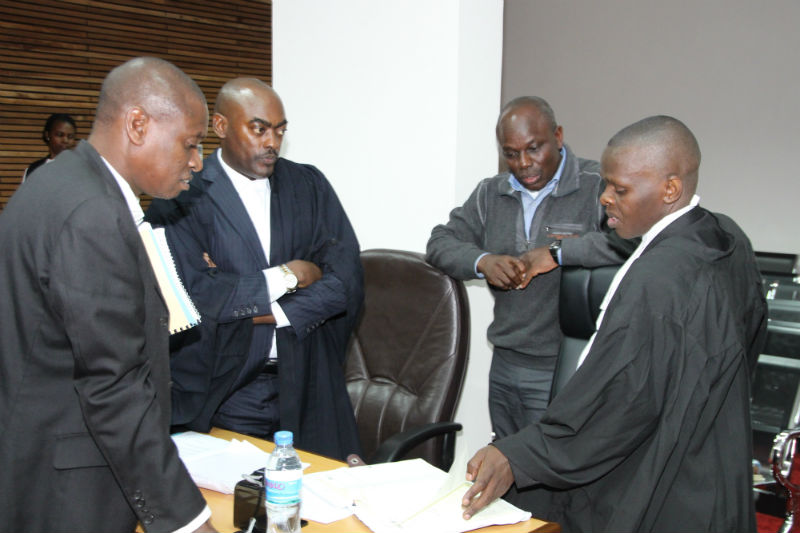 The First Instance Division declined to grant ex parte orders (Order granted in the absence of the opposing party) to Mr Hassan Basajjabalaba (Ugandan), to stop the government of Uganda from summoning him for investigation over a criminal case.

The ex-parte Application was filed on 17th April 2018, under a certificate of urgency premised under Article 39 of the Treaty for the Establishment of the East African Community and Rule 21 (2) of the Rules of procedure of the court.

The present Application was triggered by a letter dated 9th April 2018, requiring the Applicant to appear before the CID at Kibuli on 24th April 2018, to provide further information in the matter under investigation to facilitate the ongoing preparations for the hearing of the criminal case against the Applicant.

The Applicant (Basajjabalaba) was seeking ex-parte restraining orders directed at the Respondent (The Republic of Uganda) and his agencies, specifically the Uganda Police and any other security agency or department of the government of Uganda. The Applicant sought the following Court orders: That the summons issued on 9th April 2018, requiring the attendance of the Applicant before the Criminal Investigation Department (CID) to be interrogated or questioned in relation to criminal case No. 3 of 2018, in which the Applicants are accused persons, should not be implemented until the hearing of their Reference pending before this Court; other orders sought are in respect of restraining orders to stop the arrest of the Applicant they are being charged in any court and the reconstitution of any bench of the Constitutional Court of Uganda to re-fix for hearing de-novo (hearing the matter afresh) of the petition No. 3 of 2013, pending delivery of judgment by that Court.

Court after listening to the arguments of the Applicant, in its ruling said that it is not satisfied that the Applicants have made a case to warrant the grant of ex parte order in their favour and consequently declined to do so. Rule 21 (2) grants court discretion to grant ex-parte order if it is satisfied that the delay caused by proceeding the traditional way would entail the irreparable injustices.

Court noted that, it is aware that the Applicant on 8th May 2013, obtained orders in petition No.12 of 2013 by the Constitutional Court in Uganda, in which the Respondent (Government of Uganda) was prohibited from court using the processes of any court, so as to initiate and prosecute the Applicants for any charges arising out of or in connection with the issues forming the subject matter of the criminal case mentioned earlier. The Constitutional Court also ordered that all pending charges and proceedings against the Applicant in the same criminal case No. 3 of 2013 be stayed.

Court further said that, in its view, the above orders issued by the Constitutional Court of Uganda are broad enough to cover the Applicants complains before it at the ex-parte stage and it’s their enforcement that the Applicants should pursue  in the interim, rather than seek a re-issuing of the same orders by the EACJ without hearing the Respondent. “We say so guardedly and without in any way making a determinate finding on the merits of the Applicants’ case at the inter-partes stage (all parties in the case) hearing the Respondent” said the Court.

The Court also said that, it does not see irreparable injustice the Applicants may suffer if it does not grant any ex-parte orders, as they are already the beneficiaries of protective orders issued by the Constitutional Court of Uganda.

Rule 21 (2) of EACJ Rules provides that “No motion shall be heard without notice to the parties affected by the application. Provided, however, that the First Instance Division, if satisfied that the delay caused by proceeding in the ordinary way would or might entail irreparable injustice, may hear the motion and make any ex parte order upon such terms as to costs or otherwise, and subject to such undertaking, if any, as the Division deems just.