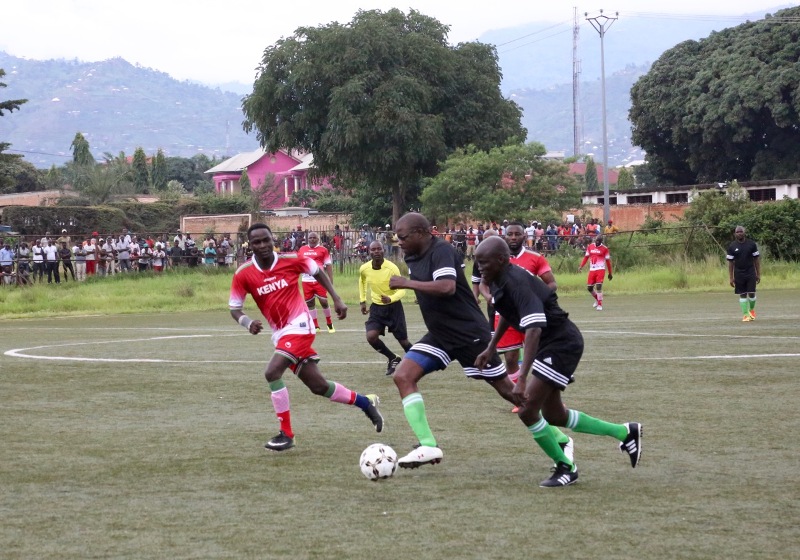 EALA wins in soccer, beaten in volleyball and netball as games enter day 5

In football, EALA got off to a good start by defeating Parliament of Kenya 2-1 in an entertaining match at the Centre Technique, Ngagara in Bujumbura. Ahmed Mwapambe and Wycliff Ketto scored the all-important goals for the victors while Senator Cleophas Malala reduced the deficit for the Parliament of Kenya.

Both teams started the game on a high note with end to end action. Striker, Senator Kipchumba Murkomen, could have given his team an early lead but failed to latch on to a pass by Hon David Gikaria. On the opposite side, star striker, Ibrahim Jamal upon receiving a pass from Hon Julius Maganda beat the defence but shot wide with the goalkeeper Rogers Okwiri beaten. The EALA striker was, however, carried off the pitch with a suspected collar bone injury after a collision with a Parliament of Kenya player.

Ahmed Mwapambe was later to beat Rogers Okwiri to give EALA the lead after tapping in the ball, moments after Kenya’s goalkeeper blocked a rasping shot by Hon Kim Gai. In the second half, EALA resumed forcefully with the striking force making constant raids on the Parliament of Kenya backline.  It paid off when Wyclif Ketto beat the defense line to unleash a block-buster in to the roof of the net for the second goal.

In other games of the day, Parliament of Uganda (women) won Parliament of Kenya by 3 Sets to 0. The victors won the first two sets 25-13 before taking 25-17 win to seal the lead.

More games are expected on December 6 as Burundi and Uganda play in the first netball match before Parliament of Kenya lock horns with Parliament of Tanzania in the second match.