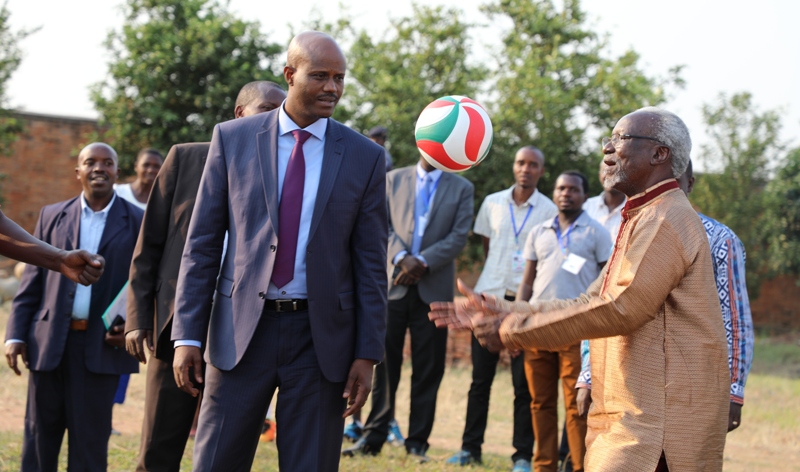 East African Community Headquarters, Arusha, Tanzania, 17th August, 2018: The 2nd Vice President of the Republic of Burundi, His Excellency Joseph Butore officiated at the kick-off of the 14-day inaugural EAC Games at the Lycee SOS HG in Bujumbura, Burundi.

Addressing Honourable Ministers; Members of Parliament; Members of the Diplomatic Corps; Sports men and women from the Partner States, and the citizens of Bujumbura, who thronged the Play field of SOS HG School, the 2nd Vice President, who represented H.E. Pierre Nkurunziza, reaffirmed the commitment of the Republic of Burundi to the promotion of close cooperation among the Partner States in the field of sports, particularly by promoting and valuing the various sports activities.

H.E Butore informed his audience that sports was a channel for strengthening and safeguarding unity and peace in the development of the world, adding that “Faced with the issues and challenges of the globalized world, the EAC Games are one of the answers to the question of youth employment, who are the majority of the population, and a pathway for their socio-economic integration”.

The 2nd Vice President asserted that the major concern in the region was to strengthen interstate partnership, to build and consolidate synergy, in order to achieve the goals of sustainable development. “We must therefore turn the page of history and build a world united in the spirit of the people, in order to invite them to reject violence, and give a place of choice to the culture of peace in African in general, and in the East African Community in particular”, noted H.E Butore.

At the same occasion, Uganda’s 2nd Deputy Prime Minister and Minister of EAC Affairs and Chairperson of the EAC Council of Ministers, Rt. Hon. Kirunda Kivenjija, disclosed that the Council of Ministers will, in the next 5 years, endeavor to promote and support the development of Sports through public-private sector partnerships. “This will be done in fostering closer collaboration among Partner States to strengthen the sports institutional capacities and establish a conducive regulatory frameworks in the region”.

He said greater emphasis will be put towards attraction of domestic and foreign investment for construction of sports facilities across the region, development of sports academies for effective tracking and nurturing of talents. He reiterated that the role of Sports in reinforcing the spirit of East African unity and development and galvanizing a passionate, visionary and broad participation among the East African people.

On his part, the Secretary General of the East African Community, Amb. Liberat Mfumukeko said the EAC Games being launched for the first time in the region will be conducted every two years on rotational basis in accordance with the Decision of the Council of Ministers.

He disclosed that in this 1st edition, more than 1,000 sports men and women from the EAC Partner States were on the ground and will participate in Football, Volley Ball, Karate, Boxing, Tennis, Rugby, and Half Marathon.

He noted that the EAC Games was providing an opportunity for East Africans to showcase the diverse sporting talents and an avenue for sports talent exchange, learning and celebration. He said the EAC Secretariat’s focus is to make the regional sports event attractive to the public to enable East Africans to move across borders to interact freely within the Community.

The 1st Edition of the East African Community Games (EACoG) is being hosted by the Republic of Burundi from 16th to 30th August 2018 in the city of Bujumbura, and in the town of Gitega, under the theme Fostering EAC Integration and Peace through Sports. The Games will take the form of all East Africa Games and will include multiple sports disciplines including: Football, Volley Ball, Karate, Boxing, Tennis, Rugby, and Half Marathon to be competed among the Partner States.

EACoG is a Regional Sports initiative that emanates from the decision of the 20th EAC Council of Ministers, which directed the Secretariat to organize and hold Sports Tournaments on regular basis with partnership of private sector, civil society, voluntary organizations/ institutions/individuals and Development Partners.