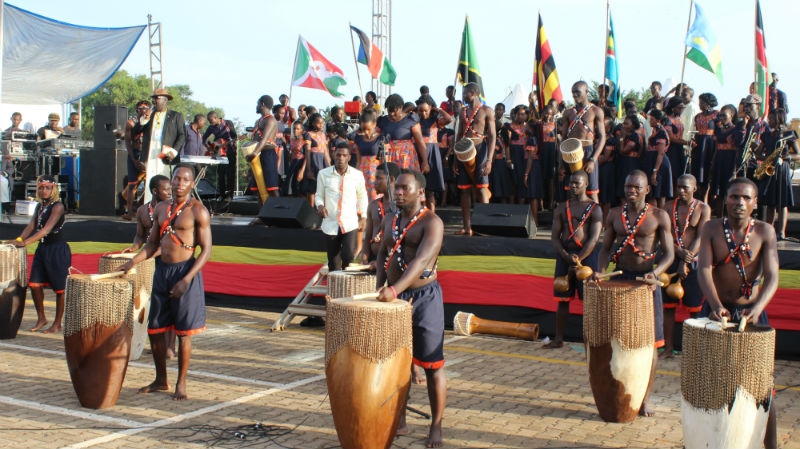 The President, who was represented at the colorful launch by Uganda’s Prime Minister, Rt. Hon. Dr. Ruhakana Rugunda, said the EAC Arts and Culture Festival was intended to send a powerful signal to the region and the world that the regional bloc was still active and very united.

The President cautioned the young people in the region to be responsible and always be mindful of the challenges posed by globalization.

The main objective of the festival, organized by the EAC Secretariat in collaboration with the Ministry of Gender, Labour and Social Development and the Ministry of East African Community Affairs, is to promote regional socio-cultural integration through arts and culture by providing a regional platform to showcase culture as a prime driver of EAC integration.

The festival runs from 7th to 15th September 2017 under the theme “Culture and creative industries: An Engine for unity and Employment Creation”.

Addressing the same occasion, the 2nd Deputy Prime Minister and Minister of EAC Affairs and also the Chairperson of the EAC Council of Ministers, Rt. Hon. Dr. Ali Kirunda Kivejinja, said the theme of the festival “Culture and creative industries: An Engine for unity and Employment Creation”, was very critical at a time when the region was consolidating the unity and cohesion that the people of East Africa enjoy and strive to achieve.

Uganda’s Minister of Gender, Labour and Social Development, Hon. Janat B. Mukwaya disclosed that the Kampala Jamafest had lined up over 1,000 artists, 64 performances, 8 stages, 10 traditional games, cuisine, and exhibition of cultural products from the entire region. “In brief, we shall showcase the arts and cultural endowment of the East African Community” noted the Minister.

On his part, the Secretary General of the East African Community, Amb. Liberat Mfumukeko, said “As East Africans, we gather in Kampala as One People with a Common Destiny, to celebrate and acknowledge the great importance of our cultural identity while appreciating the significance of coming together to interact and share experiences meant to foster social cohesion and unity.”

The Secretary General noted that the region’s collective mission remains to work towards a culturally integrated East Africa whose overriding agenda was to improve the living conditions of the citizens, and people moving and interacting freely across boarders in fulfillment of their dreams and ambitions, and eventually attaining the dream of the founders of East, which is a political federation.

Amb. Mfumukeko asserted that following the recent directive by the Summit to the EAC Secretariat to have a model constitution of the Confederation of the East African States, the journey of a politically and culturally integrated East Africa had started.

He said Jamafest provides an excellent opportunity and platform for the exchange of information, ideas and interaction between cultural practitioners, public policy makers and private sector actors from the EAC region and beyond.

“The EAC integration is not just about growing our economies through increased trade and investment at the regional and international levels. It is my belief that these festivals give East Africans a unique opportunity not just to showcase and celebrate their cultures, but to strengthen their common identity as well” affirmed the EAC Executive.

The Jamafest is being held within the provision of Article 119 (c) of the Treaty for the Establishment of EAC where Partner States undertake to promote close cooperation amongst themselves in culture and sports.