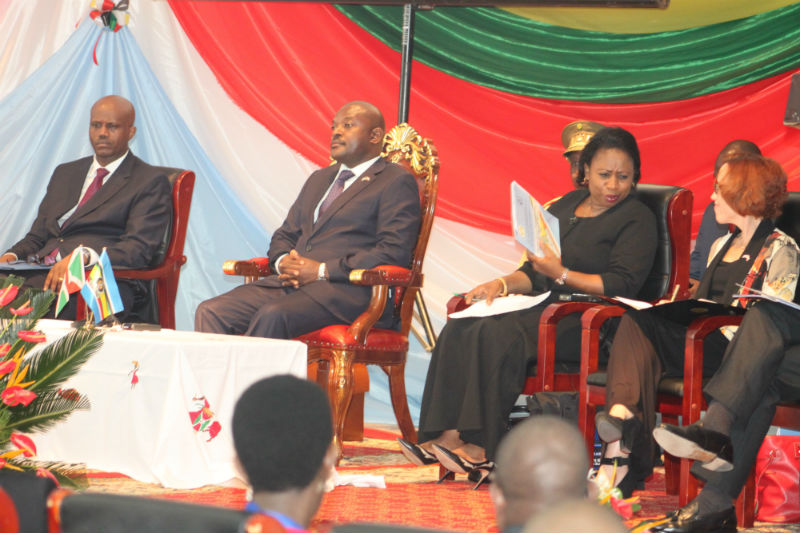 East African Community Secretariat; Bujumbura, Burundi; 29 March 2017:
Burundian President Pierre Nkurunziza has urged researchers from the six East African Community Partner States to set aside the tendency to compete amongst themselves and instead embrace a culture of cooperation in their work.

President Nkurunziza said closer cooperation among researchers and scientists in the region would result in synergy and greater benefits to East Africans. President said this cooperation was all the more relevant at a time when the world is getting smaller with increasingly cross-cutting concerns.

The Burundian leader called on governments and other stakeholders in the region to commit themselves to ensuring that people, their livelihoods, well-being and in particular their health are the focus of climate change.

“I invite the health and environmental sectors within the Member States of the East African Community to exchange their experiences, technical expertise and best practices to improve health and protect the environment,” said Nkurunziza.

"I also strongly appeal to economic operators in general, and manufacturers in particular to become more aware of health issues, especially in as much as their actions often have a negative impact on animal and environmental health,” he added.

The Head of State said that today climate change increases food insecurity, worsens malnutrition and accentuates the spread of vector-borne diseases such as malaria in East Africa.

“The health situation in our Community therefore calls for a medium- and long-term programme to combat the vectors of these diseases and to educate the public about the change of behaviour in order to have a sound health and an increased awareness for the protection of the environment,” said the President.

President Nkurunziza said that the free movement of people and goods as enshrined in the EAC Common Market Protocol comes at a cost, adding that such challenges could only be overcome through research.

In these times when borders are opening up, implying not only a greater circulation of goods, people and ideas, science is an indispensable competitive advantage, while research for development brings about solidarity and innovation,” he said.

The President said that in recent decades, new diseases had not only emerged but diseases that were considered to be under control had also re-emerged in a much a more serious form.

“The exponential mobility of people helped by transport development, creates conditions conducive to the spread of these pathologies and their geographical spread is now progressing at a more sustained pace than in the past. These diseases originate from various causes: zoonotic, food, chemical or radio-nuclear materials,” added Nkurunziza.

Speaking at the function, Hon. Ummy Mwalimu, the Chairperson of the EAC Sectoral Council on Health who is also Tanzania’s Minister for Health directed the East African Health Research Commission to relocate from Arusha, Tanzania to Bujumbura where it is supposed to be based immediatly.

Hon. Mwalimu said the Council would not entertain any more excuses from the Commission on why it would not relocate to Bujumbura.

Hon. Mwalimu was responding to concerns raised by Burundi’s Health Minister, Hon. Dr. Josiane Nijimbere, who urged the EAC to fast-track the relocation of the EAHRC to Bujumbura.

Themed: Preparedness for and control of disease outbreaks, epidemics, and pandemics, in the context of climate change, globalization, and gaps in health systems, the event is being organized by the East African Health Research Commission (EAHRC) of the East African Community in collaboration with the EAC Partner States through their respective National Ministries responsible for Health, EAC Affairs, and other relevant institutions and bodies, and in close collaboration with regional and international health-related NGOs, civil society organizations, individuals, and other stakeholders in the region.

According to the Executive Secretary of the EAHRC, Prof. Gibson Kibiki, the National Steering Committee and its Scientific sub-committee are on top of things and so far over 500 participants are expected to attend and the process for registration is ongoing. Key resource persons and Development Partners have also confirmed their presence.

The Conference’s participation fee for citizens of the EAC Partner States is US$ 50, Students is US$ 10, Students with selected abstract: free, and Non EAC Citizens is US$ 200. The Exhibitors’ Fee is US$ 250 per day.

The Executive Secretary has also confirmed that six (6) Symposia as side meetings to the Conference will be held as follows, the first one will look at lessons learnt from:

The second one will tackle Gap between (mis) use of antimicrobial agents and policy on antimicrobial agents: the role of the Partner States and EAC, the third will be on Mitigating impact of globalisation and climate change on health, the forth will focus on Integrated Reproductive Maternal Newborn Child and Adolescent Health (RMNCAH) and HIV/AIDS, the fifth will be about the importance of Academic Health Centers as part of the health improvement agenda in low and middle-income countries, and lastly there is a symposium on strengthening collaboration between civil society and key research stakeholders in promoting health research and innovation in Africa.

For more information about the Conference visit: www.eac.int/6eahsc

The 12th Ordinary Session of the EAC Council of Ministers in the year 2006, approved the regional East African Health and Scientific Conference & International  Health Exhibition and Trade Fair to be convened in East Africa and hosted on a rotational basis by the EAC Partner States through their respective National Ministries responsible for EAC Affairs, the Ministry responsible for Health, and other relevant institutions and bodies, and in close collaboration with regional and international health-related NGOs, civil society organizations, individuals, and other stakeholders in the region.

The EAC Health and Scientific Conference is an opportunity for scientists and the decision makers of the region to share and discuss updated findings from health research for policy translation and practice.

The main theme and sub themes of the conference are identified following a participatory process in Partner States and are approved by the EAC Ministers Responsible for Health.

The 10th ordinary meeting of the EAC Sectoral Council of Ministers of Health held in Arusha, 16th October 2014, approved the hosting of the 6th East African Health and Scientific Conference & International Health Exhibition and Trade Fair in 2016 by the Republic of Burundi.

About the East African Health and Research Commission:

The East African Health and Research Commission (EAHRC), an Institution of the East African Community, is a mechanism for making available to the Community, advice upon all matters of health and health-related research and findings necessary for knowledge generation, technological development, policy formulation and practice, and for related matters. It is the principal advisory institution to the EAC on Health Research and Development (R&D).

The 16th to 20th January, 2017 workshop covered training of Partner States Drug Inspectors, Laboratory Analysts and Pharmacists on the use of the Minilab systems and allowed for exchange of experiences among experts from all EAC Partner States except South Sudan. The content of the workshop is drawn from existing guidelines from the World Health Organization (WHO), the Pharmacopoeias and other compendia as well as the Global Pharma Health Fund’s long-term Minilab project work on the detection of counterfeit medicines using simple pharmaceutical analysis.

The overall objective of the workshop was to train drug Inspectors on how to test basic and vital anti-infective medicines such as anti-microbial, anti-retroviral, anti-malarial, anti-hypertensive and anti-tuberculosis that would be instantly life-threatening when they are contained in spurious quantities or do not meet international best standards.

Addressing the workshop participants during the official handing-over of six minilabs to the Chief Pharmacist in the Zanzibari Ministry of Health, the EAC Director of Productive Sectors, Mr. Jean Baptiste Havugimana, who represented the EAC Deputy Secretary General (Productive and Social Sectors) thanked the German Metrology Institute (PTB) for accepting to supply a total of 20 GPHF minilabs to the National Medicines Regulatory Authorities in Rwanda, United Republic of Tanzania, Zanzibar and Burundi. Havugimana also thanked the Zanzibar authorities and the College of Health, Zanzibar for hosting the workshop.

He disclosed that the supply of minilabs and training of EAC Drug Inspectors will yield tangible results to the EAC population who require high quality standards medicines free from counterfeits and falsified products.

“I am proud of this achievement. It is a tangible result which EAC as a whole and Partner States and in particular Medicines Regulatory Authorities need to be proud of. Minilabs will go a long way in helping the Republic of Rwanda, Burundi, United Republic of Tanzania, and Zanzibar in setting up a functioning decentralized market surveillance system that is able to protect EAC citizens, who are the intended beneficiaries, consumers from falsified drugs,” said the Director.

In his remarks, the Chief Pharmacist from the Ministry of Health of Zanzibar, Dr. Habib Ali Shariff, said that the Zanzibar Food and Drug Board is actively participating in regional harmonization initiatives and has already amended their regulations to strengthen medicines regulatory capacity for the betterment of the EAC population.

Dr. Shariff said that circulation of substandard products is a global problem and therefore, it is the responsibility of every Medicines Regulatory Agency to ensure supply of quality medicines to the end users.

The regional workshop on GPHF Minilab funded by German Metrology Institute saw 15 Drug Inspectors from EAC Partner States who participated in the workshop being awarded certificates for completion of the Training of Trainers workshop.

Germany supports Pandemic Preparedness and ICT in the EAC

3 million euros in technical assistance will be invested in strengthening the pandemic preparedness of the region. The project will support the operationalization of the EAC Regional Contingency Plan and a regional risk and crisis communication strategy.

4 million euros in technical assistance will be invested in an Academic Center for Digital Innovation. The project will support the set-up of a State of the Art Master programme focusing on embedded and mobile systems at an East African University, supporting the development of a skilled labor force in East Africa.

The projects will be implemented by the GIZ, the German International Cooperation Agency.

Speaking during the signing ceremony, the EAC Secretary General, Amb. Liberat Mfumukeko, thanked the Government of the Federal Republic of Germany for its support to the EAC.

‘’We have truly benefited from the German support which has catalysed other development Partners to support our projects and programmes,” said Amb. Mfumukeko.

H.E. Egon Kochanke, Ambassador said: “Our support underlines that Germany wishes to further strengthen the long-standing and deep relationship it maintains with the East African Community in order to contribute to the well-being and prosperity of its citizens”.

Accompanying Ambassador Kochanke was the Country Director of GIZ, Dr. Regine Qualmannand, the Deputy Head of the GIZ Program at the EAC Dr. Kirsten Focken as well as Councellor of the Embassy, Mrs Lena Thiede. Others at the function were EAC Deputy Secretary General Finance and Administration, Hon Jesca Eriyo and Deputy Secretary Productive and Social Sector Hon. Christophe Bazivamo.

Since cooperation began in 1998 the total volume of German support to the EAC amounts to over 240 million euro.

GIZ is providing services worldwide in the field of international cooperation for sustainable development. GIZ has over 17,000 staff in over 130 countries, headquarters are in Bonn and Eschborn/ Germany.