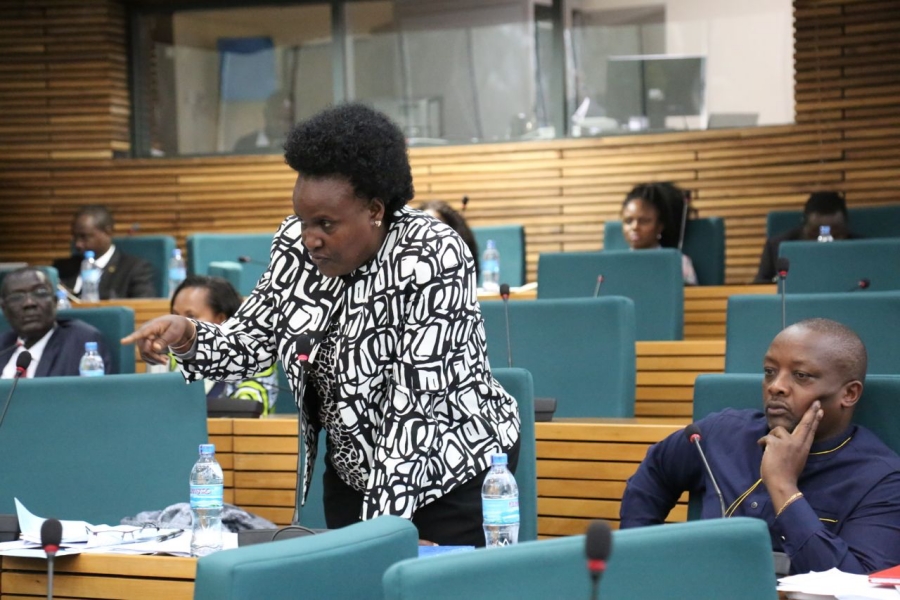 …Only Burundi’s EAC Minister was on front-bench

East African Legislative Assembly, Arusha, Tanzania: 25 June, 2019: The debate and approval of the EAC Budget proposals for the Financial Year 2019/20, will now be delayed for another day following adjournment of debate this afternoon. EALA Member, Hon Rose Akol, this afternoon moved a motion for adjournment, (under Rule 30 (c) of the Rules of Procedure of the EALA), citing the absence of majority of the Members of the Council of Ministers, with only Burundi’s EAC Minister, Hon Isabelle Ndahayo in attendance.

In her submissions, Hon Akol lamented over the absence of the Members of the Council of Ministers who occupy the front-bench. “Ideally, in the respective EAC ministries, for every Minister, there is a deputy minister. It is absurd just to have one in attendance. We must therefore adjourn until such time when the Council of Ministers is represented and prepared to come and address issues on the budget. We cannot talk much when the front bench is empty”, the legislator said.

Hon Abdikadir Aden, noted the absence of the front bench was not a good sign given the fact that the budget is a critical matter. Hon Susan Nakawuki on her part called for more attention by the EAC Council of Ministers. “We are not ready to proceed with the debate”, the legislator said.

Hon Noor Mohammed termed the budget session as too critical for the Assembly to be seen to be ‘talking to itself’. Hon Kim Gai however, said the Council of Ministers and the General-Purpose Committee had agreed in principle during the Committee level and that it was therefore in order for the House to continue with its business, a move that was defeated.

While guiding the House, Speaker, Rt Hon Ngoga Martin said in terms of legality, the Assembly was duly constituted since nothing in the Rules of Procedure bars it from conducting business in absence of Ministers. The rules he said did not specify about quorum issues when it comes to the attendance of the Members of the front bench.

The House unanimously decided to adjourn the business to tomorrow afternoon (June 26th, 2019).  As per the Order Paper, the House was expected at the session to resolve itself in to a Committee of Ways and Means and a Committee of Supply to consider and approve the Financial Statement and approve the estimates of expenditure and revenue for the next Financial Year.

Last week, the Assembly received the EAC Budget speech presented to the House by the Deputy Minister for Foreign Affairs and East African Co-operation, United Republic of Tanzania, Hon Dr Damas Ndumbaro, on behalf of the Chairperson of the EAC Council of Ministers. The estimates for the Financial Year 2019/20 amounts to US$111,450,529.

The East African Legislative Assembly has legislative functions as well as oversight of all East African Community matters.  The enactment of legislation of the Community is put in effect by means of Bills passed by the Assembly and assented to by the Heads of State, and every Bill that has been duly passed and assented to become an Act of the Community and takes precedent over similar legislations in the Partner States.  EALA has to date passed 79 pieces of legislation.