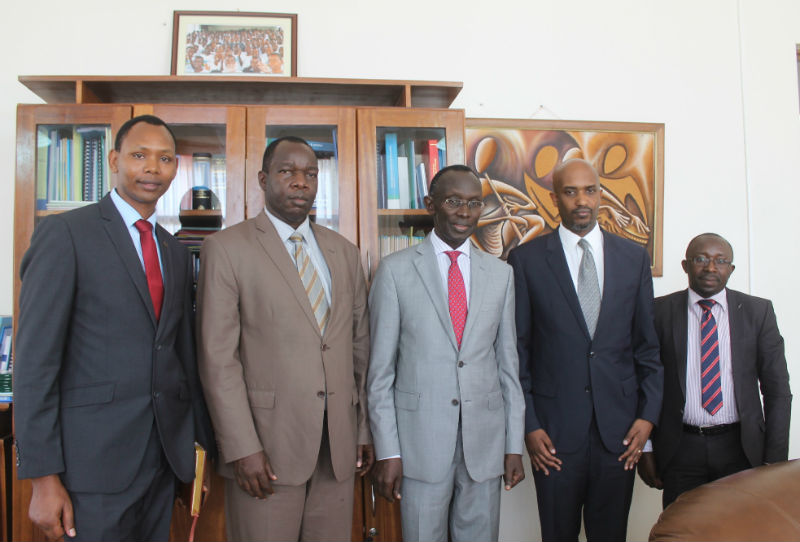 The President of the East African Court of Justice Hon. Justice Dr. Emmanuel Ugirashebuja paid courtesy call to the Chief Justice, His Lordship Justice Sam Rugege and Minister of Industry, Trade and East African Community Affairs, Hon. François Kanimba of the Republic of Rwanda on Tuesday and Wenesday last week.

The purpose of the courtesy call was to establish the collaboration with the Judiciary of Rwanda through preliminary rulings of National Courts, whenever they have any matter to refer to the EACJ for Treaty interpretation and application under Article 34 of the Treaty for the Establishment of the East African Community.

His Lordship the President told the Chief Justice that there is need to strengthen this relationship by educating the Rwandan Judicial Officers (Judges, Registrars and other officers) on this provision to enable them understand and utilize it whenever a question on interpretation of the Treaty raises before any Court or tribunal in Rwanda or any other Partner State.

In addition, Justice Ugirashebuja explained the impact on the jurisprudence of the EACJ in the regional integration process.

He emphasized that, the decisions of this Court (EACJ) on the interpretation and application of the Treaty, have precedence over decisions of national Courts on similar matter as it is stipulated under Article 33 (2) of the Treaty.

The President further expressed the need of support from the Judiciary of Rwanda in providing court rooms and offices whenever there is sitting of EACJ in Rwanda. Further he thanked the Chief Justice for hosting the EACJ Sub-registry in Kigali that, it a sign of existing relationship that needs continued collaboration.

His Lordship the President of the Court, while meeting the Minister of Industry and Trade, Hon. Kanimba, explained the jurisdiction of the Court which was extended to handle matters on trade and investment, pending ratification by the Partner States.

He further appealed to the Minister to follow up on the Government of Rwanda through His Excellence the President of the Republic of Rwanda, Paul Kagame to speed up the ratification process and deposit the instruments for ratification to the Secretary General.

Justice Ugirashebuja also requested the Minister to champion and advocate for the Court to the Council of Ministers to end the ad-hoc nature of the services of the Judges. He further said that, because some Judges serve as judges in their national courts and therefore it might cause delays in disposing off some cases in the EACJ due to their busy schedules in their Partner States judiciaries.

Justice Ugirashebuja, finally called upon the Minister to table the EACJ Administration Act, to the Council of Ministers and be submitted to the President to assent to it. His Lordship further requested the Minister to facilitate the process and to ensure the Act is expeditiously assented to, so that the Court can be granted its fully Financial Autonomy.

The Minister commended the President for the initiative to visit the Ministry, to explain the role and jurisdiction of the Court in the furtherance of the EAC Integration agenda. The Minister assured him his fully support to ensure the EACJ smooth operations in delivering quality and quick justice to the East Africans, especially on the utilization of the trade and investment jurisdiction as the Partner States continue the implementation of the Customs Union and Common Market Protocols, where a number of disputes may a raise.

The President further proceeded to Nyanza, at the Institute of Legal practice to deliver a lecture on the contribution, role and jurisdiction of the Court.

The president said that the courtesy calls started in the Republics of Uganda, United Republic of Tanzania, now Rwanda and the will still continue to other Partner States. The President was accompanied by the Registrar of the Court, His Worship Yufnalis Okubo and other support staff.