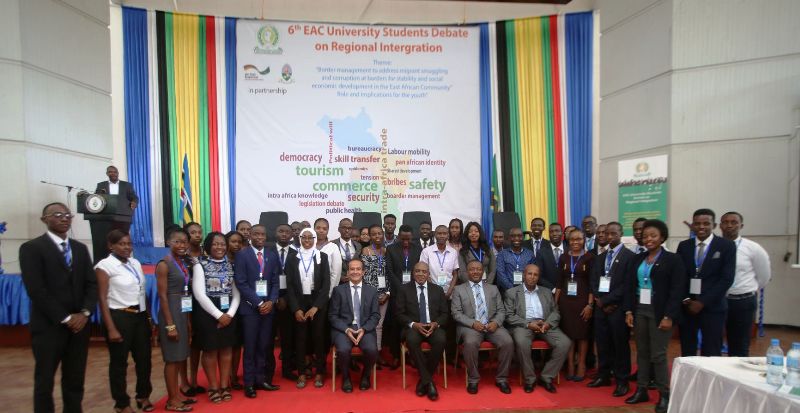 Speaking when he officially opened the debate, the EAC Deputy Secretary General in charge of Political Federation, Mr Charles Njoroge, cautioned young people within the EAC against falling victim to migrant smuggling as they look for greener pastures across national borders.

Mr Njoroge said that crafty persons and cartels had taken advantage of young people seeking better opportunities out of their countries.

Mr Njoroge said that the problem of migrant smuggling had been compounded by insufficient systems and corruption, which hinder national and international efforts to combat transnational and cross-border crimes.

The DSG said that as the integration deepens, there was an overwhelming movement of people across the borders, adding that this free movement comes with various challenges including trafficking of persons, migrant smuggling, drug trafficking and terrorism.

He said that the EAC was undertaking various initiatives to promote continuous dialogue among the youth and enhance their participation in moving the regional integration process forward.

A total of 30 students from Burundi, Kenya, Rwanda, Tanzania and Uganda are participating in the debate that is aimed at picking a Youth Ambassador and Deputy Youth Ambassador from each EAC Partner State. There were no participants from South Sudan.

The theme of this year’s debate is: Border management to address migrant smuggling and corruption at borders for stability and social economic development in the East African Community – Role and Implications of the youth.

“Our Youth Ambassadors are a tested group of young leaders. The selection process is highly competitive and subsequent capacity building programme ensures that the youth leaders are well nurtured and groomed for furthering personal and regional development of EAC,” said Mr Njoroge.

Speaking at the event, Prof. Cuthbert Kimambo, the Deputy Vice Chancellor-Research, at the University of Dar es Salaam, said the debate was a noble initiative that could be used to bring young people to discuss pertinent issued concerning the EAC.

“The University of Dar es Salaam firmly believes that the youth are a key stakeholder in the entire EAC integration process and we need to engage them in matters of East African integration at each step of the way,” said Prof. Kimambo.

In his remarks, Mr. Esayas Abebe, the Head of Programme, GIZ Support to the African Union Border Programme, said the debate was a smart endeavour by the EAC to inclusively involve its citizens in order to strengthen the sense of “East African-ness” of its young citizens who are both the present and future of the region.

In his remarks, the Deputy Ambassador of Germany to Tanzania and EAC, Mr. Jörg Herrera, acknowledged the significance of border management in integration processes. He further emphasized the long standing commitment of Germany in technical and financial support towards integrated border management.

The Deputy Ambassador noted the importance of involving the youth in the effort to combat migrant smuggling and corruption through effective border management. "The youth shall raise awareness about the value of regional integration within the community and form and foster the integration process within the EAC in order to pass on this cooperative spirit to future generations," noted Ambassador Herrera.

The Summit of EAC Heads of State in 2008 decided on the deepening sensitization and awareness creation for greater political will as a means for realization of the East African Political Federation. University Students Debate and sensitization was adopted as one of the strategies.

As an outcome of the debates, two youth are appointed to represent each country as EAC Youth Ambassador and Deputy Youth Ambassador. These Youth Ambassadors act as focal points in their respective universities, collaborate with the EAC Secretariat in sensitizing their peers on the EAC integration process, benefits and challenges. The EAC Council of Ministers declared the EAC University Students Debate an annual event. 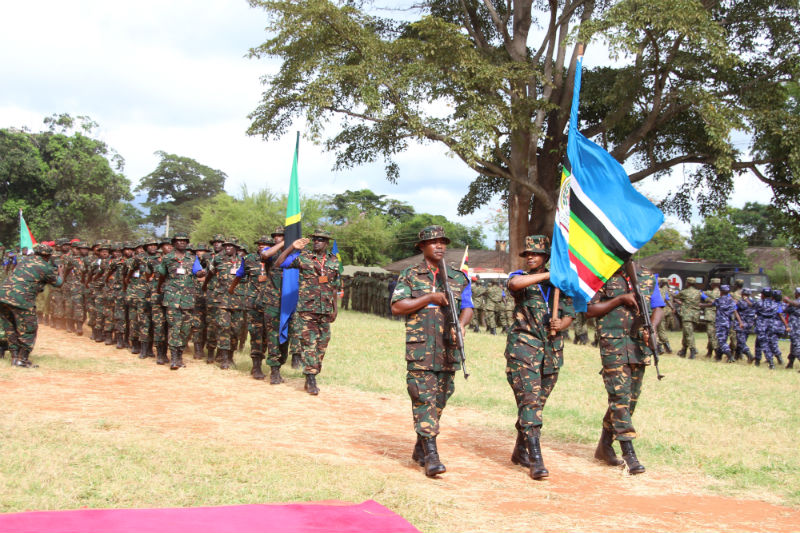 The main objective of the FTX is to train the participants of the Combined Joint Task Force in planning and conducting Joint Peace Support Operations, Disaster Management, Counter-Terrorism and Counter Piracy.

Speaking at the opening ceremony, the Tanzanian Minister of Defence, Dr. Hussein Ali Mwinyi said the joint exercises would enable members of the Armed Forces to share knowledge and skills on matters pertaining to defence and security.

“I am profoundly pleased that the exercise has taken on board a wide range of institutions like the Police Force, Prison Service, Immigration Department, Intelligence Services, Counter Terrorism Services, Foreign Affairs, Ministry of Health, Community Development as well as the Red Cross apart from members of military,” said Dr. Mwinyi.

The Minister hailed the EAC Partner States for their active participation in the concept development, conference initial planning, and final planning conferences that enabled the exercise to take place.

“This is a vivid testimony that you have attached considerable value to this exercise and the entire integration within our community. Indeed, it is such commitment that is likely to propel us further in our endeavours,” added Dr.Mwinyi.

On his part, EAC Secretary General Amb. Liberat Mfumukeko, in a speech read on his behalf by the Chairperson of the EAC Defence Liaison Officers, Brigadier General Geoffrey Tumusiime, said that the Exercise was being conducted under the platform of the EAC Protocol on Cooperation in Defence Affairs.

“It is in line with a series of Joint Training Exercises conducted on a rotational basis in EAC Partner States aimed at enhancing the capabilities of the EAC Partner States’ Defence Forces, Police, Civilian Components and other key stakeholders in conducting joint operations,” said Amb. Mfumukeko.

“I take this opportunity to applaud the Partner States’ Armed Forces, Police, Civilian Components and all other Stakeholders for their commitment in participating in these joint exercises. I also commend our Defence Forces for going beyond the training exercises and undertaking joint operations in various missions such as MONUSCO in the Democratic Republic of Congo, AMISON in Somaila, UNAMID in Darfur and other missions within and beyond the region, said the Secretary General

The Chief of Defence Forces in Tanzania, General Venance Mabeyo, said the contemporary political and security challenges facing the region and the word at large, calls for the regional attention to enhance the capacity to maintain peace and stability with the aim of creating conducive environment for social-economic development in the region.

“I am pleased to note that the conduct of this Exercise is yet another significant milestone towards the operationalization of our cooperation in Defence in the region,” said Gen. Mabeyo. 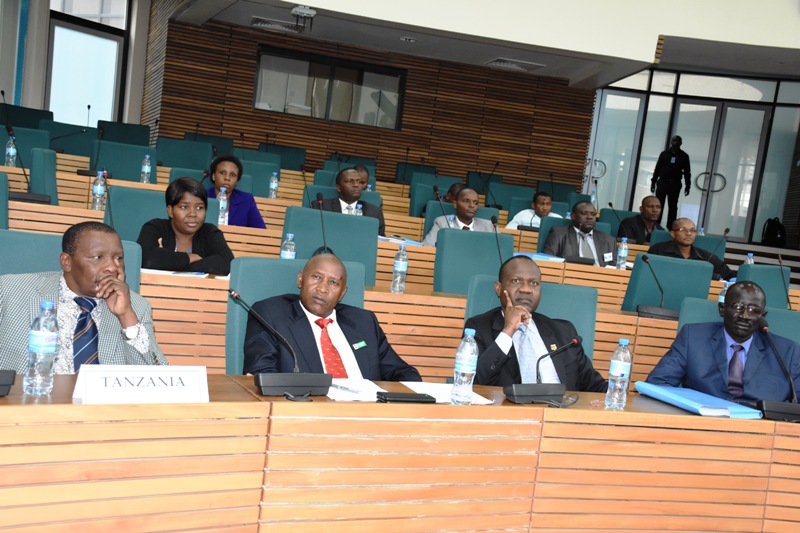 The Meeting is considering several items pertinent to strengthening and widening the regional integration agenda in the Defence sector that include, among others, planning for the 11th EAC Armed Forces Field Training Exercise USHIRIKIANO IMARA 2018; issues to do with the EAC Command and Staff Colleges/Higher Military Training Institutions/Military Academies; Health Services of the EAC Partner States’ Armed Forces; Military Industrial Facilities availed for Shared Utilization; and EAC Counter Terrorism strategy.

The meeting is also considering the EAC Armed Forces’ Standing Operating Procedures; and the Draft Defence Sector Calendar of Activities for the Period January to June 2019.

The ongoing session is being attended by the Partner States’ Defence Experts Working Group on Operations and Training. 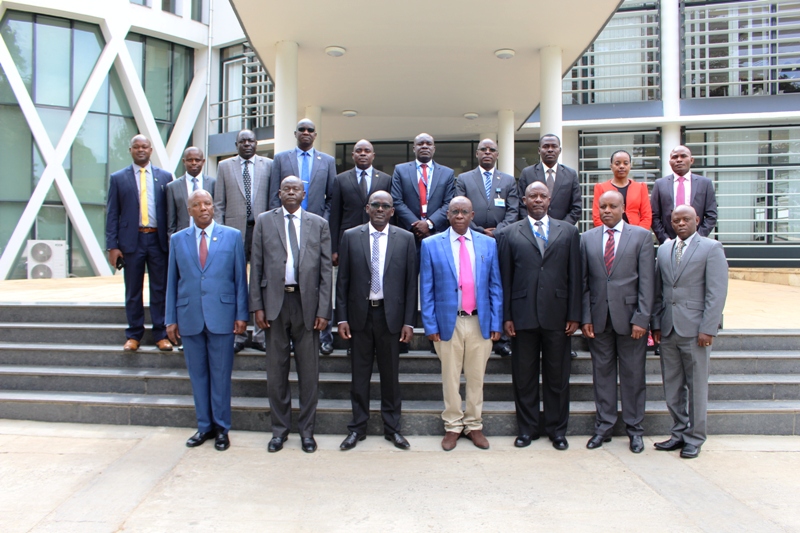 East African Community Headquarters, Arusha, Tanzania, 15th October, 2018: The Chiefs/Directors of Health Services of the EAC Partner States’ Armed Forces have converged at the EAC Headquarters in Arusha, Tanzania, to discuss and share information among Partner States’ Armed Forces on health matters and to review the status of implementation of previous decisions on the same matter by the Sectoral Council on Cooperation in Defence.

Themed “Border management to address migrant smuggling and corruption at borders for stability and social economic development in the East African Community: Role and Implications for the youth”, the Debate is set to enhance youth participation in the EAC integration agenda and processes.

The EAC University Students’ Debate Model is an interactive and representational style of debating aimed at educating, discussing and making resolutions among the Youth in East Africa to nurture a bond of “East Africaness” with a distinct East African identity that is highly desirable. The objective of the Debate Model is to exchange information, share ideas and cultivate common ground on regional integration issues among the students and youth in the Community.

The EAC recognizes that youth are a crucial asset, an important key resource and partners in social economic and political development of the Community.  The EAC has been undertaking various initiatives to promote continuous dialogue among the youth and promoting their participation in moving the EAC regional integration.

The EAC University Students’ Debate lays emphasis on the use of the value and policy approaches given that the EAC Integration is people-centred and Private Sector driven, hence giving the youth an opportunity to come up with policies that will enable the Secretariat develop programs and initiatives aimed at empowering youth in the region.

The 2018 edition of the Debate is will feature discussions on issues related to:

Participation in this debate is limited to students who are in their second year at the university pursuing a degree. Students who participated in the last three debates need not to apply to give an opportunity to others to take part. Interested applicants with good analytical, communication skills, and a good command of English are encouraged to apply.

Students from University or Institutions of Higher Learning in the East African Countries who are interested to participate should apply by submitting the following documents:

The documents should have a font size of 12, Arial with single line spacing and should be sent as one attachment. To: East African Community, Nyerere Centre for Peace Research, on email: This email address is being protected from spambots. You need JavaScript enabled to view it..The applications should be received not later than 28th September, 2018 at 5:00 pm East African time.

Please note that only successful candidates will be contacted.