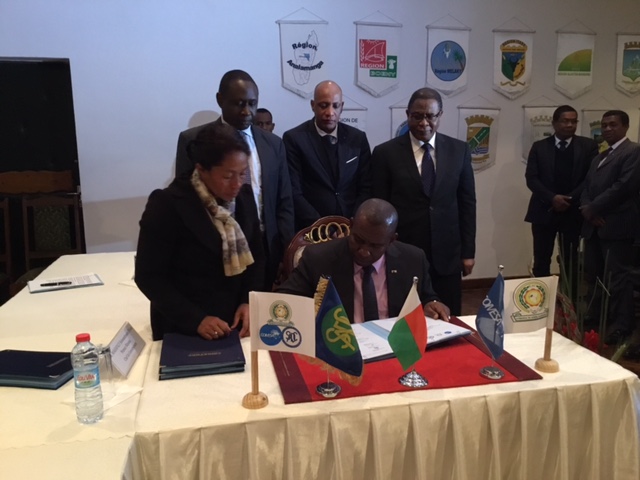 The Republic of Madagascar has become the 20th country to sign the Tripartite Free Trade Agreement. The agreement brings together three regional economic communities-COMESA, EAC and SADC- into a single free trade area. The Tripartite Free Trade Area (TFTA) constitutes 57% of Africa’s population with a combined GDP of US$1.3 trillion as of 2015, making it one of the largest free trade areas in the world.

The Tripartite Agreement was signed on Thursday 13th July 2017 by His Excellency Mahafaly Solonandrasana Olivier, Prime Minister of the Republic of Madagascar, on behalf of the Government, in Antananarivo, Madagascar.

In attendance also was Hon. Nourdine Chabany, Minister of Industry and Private Sector representing the Minister of Trade and Consumption of the Republic of Madagascar; the Counsel to the Community, Hon. Dr. Kafumbe Mukasa; senior Government Officials; representatives of the Private Sector; Their Excellencies the Ambassadors of Mauritius and South Africa; as well as the Ambassador designate of the Republic of Madagascar to the African Union.

The European Union was represented by Mr. Lothar Jaschke, Head of of Sector, Political, Press and Information from the EU Delegation in Madagascar.

The Republic of South Africa became the 19th country to sign the Tripartite Free Trade Agreement during the 6th meeting of the Tripartite Sectoral Ministerial Committee of on Trade, Customs, Finance, Economic Matters and Home/Internal Affairs (TSMC) held on 7 July 2017 in Kampala, Uganda.

At the 6th meeting of the Tripartite Sectoral Ministerial Committee, the Secretary General of the East African Community, Amb. Liberat Mfumukeko reported that 18 Member/Partner States had signed the Agreement and that Egypt was the only country to have ratified it. A total of 14 ratifications are required for the Agreement to enter force.

At that Kampala meeting, the Secretary General reported progress on the legal scrubbing of Annexes II, IV and X, negotiations on tariff offers and the signature and ratification of the Agreement.

Amb. Mfumukeko indicated that there had been limited progress on Phase II negotiations and the Agreement on the Movement of Business Persons. However, studies on Phase II issues had been undertaken and disseminated and that TTF was in the process of mobilizing resources to facilitate the necessary consultative meetings.

At the 6th meeting of the Tripartite Sectoral Ministerial Committee, Uganda’s Minister of Trade, Industry and Cooperatives, Hon. Amelia Kyambadde, stated that the intra-Tripartite trade was only 19% of the continent’s $930 billion total trade and this could be attributed to low industrialization, restricted movement of labour, poor infrastructure and high dependency on the export of unprocessed commodities.

The Minister observed that the Tripartite provided the opportunities to unlock the enormous trade and investment potential of the bloc. In this regard, the business community was waiting anxiously towards the opening up of the market of over 600 million people. She further observed that almost all the Annexes had been finalized save for the built in agenda.

At the same meeting, South Africa’s Minister of Trade and Industry, Hon. Dr. Rob Davies observed that the outstanding Annexes had been concluded and highlighted the need to have a functional FTA that would benefit the business community. He noted that the TFTA was a building block for the Continental FTA, hence the need to make more progress in the TFTA negotiations.

At the 1st Tripartite Summit of Heads of State and Government held in Kampala in October, 2008 leaders of 26 African countries met and took a bold step to establish the largest trading arrangement in Africa.