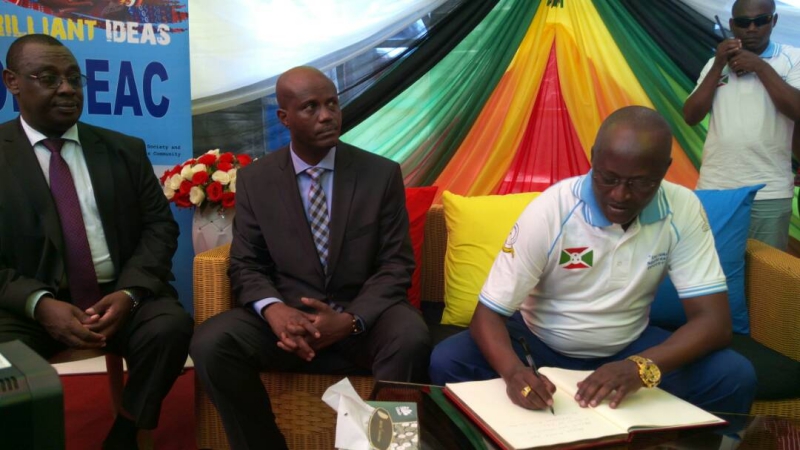 Addressing government Ministers, EAC Ambassadors accredited to Burundi, officials and artisans present, on behalf of His Excellency Pierre Nkurunziza, the First Vice President said the 18th Jua Kali exhibition came at a time when the Republic of Burundi was consolidating peace and stability, and the population of Burundi including the Jua Kali artisans were proudly going about their daily activities without fear of their security or any hindrance.

“There is now peace in each corner of the country and our Government is striving for the edification of a stable, modern and unified country”, affirmed H.E Sindimwo, adding that, “let your presence here bear witness of the peace prevailing in Burundi”.

“The country and its people are ready to move forward and we are inviting the East Africans and the international community to come and live or invest in our country, your security and investments are guaranteed by the government, so feel free to come to Burundi and explore opportunities,” declared the First Vice President.

“We feel that the East African leaders have to ensure that our integration agenda is strongly erected on peace building, which is a prerequisite that unifies all of us in the edification of a strong East African Community”.

The First Vice President noted that one of the biggest challenges to growth of the Micro and Small Enterprises and industries in EAC was lack of an elaborate and clear supportive policy framework in all the Partner States meant to, among others, create MSEs Authority or Ministries that will oversee the development and promotion of small businesses, as promoting indigenous business growth in the EAC region was an urgent matter.

Addressing the same occasion, the Secretary General of the East African Community, Amb. Liberat Mfumukeko said hosting and providing a lot of support to this year’s Jua Kali/Nguvu Kazi Exhibition in Bujumbura was a true demonstration and commitment by the Republic of Burundi to the EAC integration agenda.

He disclosed that EAC had made Jua Kali/Nguvu Kazi a priority in its successive Development Strategies specifically to promote Small and Medium Enterprises (SME) sector in recognition of the role they play within the economies of the Partner States in regard to employment creation and income generation.

The Secretary General informed his audience that the Community was continuing to make substantial inroads in the regional integration process for example implementation of the Single Customs Territory (SCT) had recorded reduction in the times taken to clear goods at the ports of entry into the region and also movement of cargo within the bloc. The Single Customs Territory had eliminated multiple clearances at internal borders and this improved situation were presenting an opportunity for SMEs to take advantage of the duty free market in EAC and also create competition from cheaper imported products.

Amb. Mfumukeko also disclosed that the Community intends to rebrand and repackage the Jua Kali Nguvu Kazi through an online platform in order to create continuous connectivity between the members.

“This will create an online network of SMEs and consumers, which will improve the markets of their products and also open up our SMEs to foreign markets and innovations”. The programme will later expand to include critical areas of financing, standards and capacity building. We will start with this exhibition by developing an online catalogue of exhibitors and their products so that there is exchange of information through a dedicated portal at regional level”, disclosed Amb. Mfumukeko

The Secretary General commended the Partner States, Confederation of Informal sector Organization, Regional and National Steering Committees, and the EAC Secretariat staff for the successful organization of the event.

Present at the official opening ceremony were, among others, Honourable Ministers of Trade and that of the Office of the President Responsible for EAC Affairs; the EAC Deputy Secretary General for Planning and Infrastructure, Eng. Mlote; the Director General of EAC Customs and Trade Directorate, Mr Kenneth Bagamuhunda; Ambassadors and High Commissioners from the EAC; Permanent Secretaries; Chairperson and members of the East African Confederation of Informal Sector Organization (EACISO); and Representatives from various institutions

In order to support promotion of the Jua Kali/Nguvu Kazi sector of the regional economy, the EAC Secretariat in collaboration with the Partner States and Confederation of Informal Sector Organization East Africa (CISO-EA) has organized the annual exhibitions since 1999. The exhibitions have proved to be strategic avenues for promoting the sector’s products, transfer of technologies, and promotion of the regional integration process.