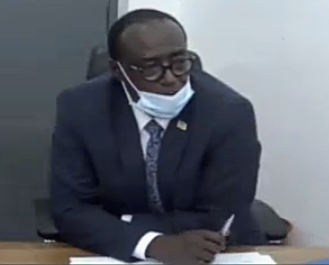 Hon Prof Nshuti was sworn in to the House virtually before the Speaker and Members of EALA in line with the Rule 5 of the Rules and Procedures of the Assembly. The Rule 5(4) of the Rules of Procedure says in part that: “No Member can sit or participate in the proceedings of the House until the Oath or Affirmation of Allegiance to the Treaty is taken”.

Hon Prof Nshuti was ushered in virtually (introduced by name) to the House by EALA Members, Hon Dr Pierre Celestin Rwigema in accordance with Rule 9 (2) on Administration of Oath or affirmation of the Rules of Procedure for Virtual Meetings and Sittings of the House. EALA Speaker, Rt Hon Ngoga Karoli Martin congratulated Hon Prof Nshuti upon his swearing in – as he assumes his ex-officio role in the regional August House. The Speaker said Hon Nshuti, a seasoned politician and academician was a ‘right fit’ for the Community having lived and worked in other parts of the EAC region

Hon Prof Nshuti has previously served in a number of portfolios in the government.

Among these, he was formerly Minister for Commerce, Industry, Co-operatives and Tourism. Hon Prof Nshuti has also served as Minister for Finance, as well as Minister of Public Service and Labour in the Republic of Rwanda.

Hon Prof Nshuti holds a Ph.D. in Finance. He also holds a Masters of Business Administration in Accounting.

In his maiden statement on the floor today, Hon Prof Nshuti assured the House of his commitment to ensure full integration is realized. The Minister reiterated hard work and commitment, as he assumes the role of ex-officio Member of the Assembly, for the betterment of the people of the region. The Republic of Rwanda is the current Chair of the EAC Council of Ministers.

The East African Legislative Assembly has legislative functions as well as oversight of all East African Community matters.  The enactment of legislation of the Community is put in effect by means of Bills passed by the Assembly and assented to by the Heads of State, and every Bill that has been duly passed and assented to become an Act of the Community and takes precedent over similar legislations in the Partner States.  EALA has to date passed 80 pieces of legislation.