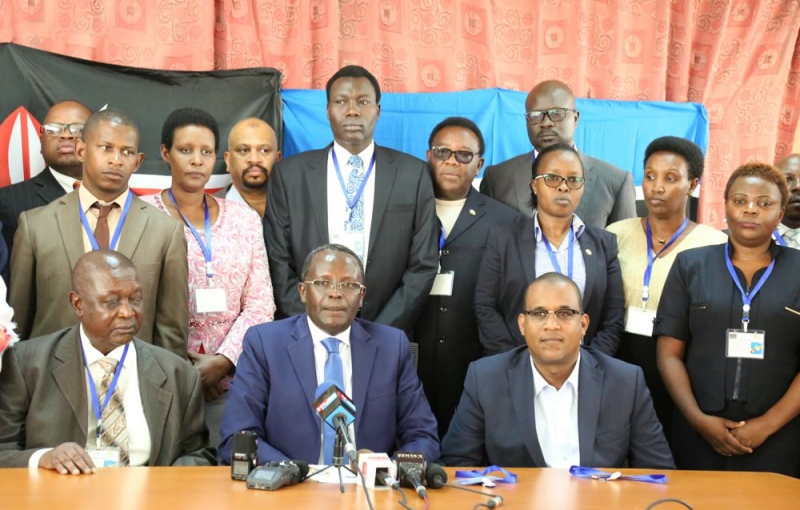 Ladies & Gentlemen of the Press,

I welcome you all to this briefing called to notify media of the commencement of the 5th Meeting of the 1st Session of the 4th Assembly, which takes place here in Nairobi from today until June 15th, 2018.

I salute and sincerely thank His Excellency, President Uhuru Kenyatta and the entire Government of the Republic of Kenya for accepting to host EALA. I further acknowledge and appreciate our hosts, the Speaker of the Kenya National Assembly, Rt Hon Justin Muturi and his counterpart at the Senate, Rt Hon Kenneth Lusaka, for granting us access to all facilities here at the Parliament of Kenya.

This Sitting is part and parcel of the principle of rotation and follows a similar one held last month, in Dodoma, United Republic of Tanzania. The rotational principle duly enhances awareness while entrenching the people-centered approach as envisaged under Article 7 of the Treaty for the Establishment of the EAC.

Over the next three weeks in Nairobi, EALA shall engage in the following notable business:

This Sitting also marks 6 months for the 4th EALA since its inauguration. Within the last 180 days, EALA has continued to make significant progress in its contribution to the integration process. Within that period, EALA has held four Sittings and in the process passed 2 laws, the East African Monetary Institute Bill, 2018 and the EAC Oaths Bill, 2018. The passage of the East African Monetary Institute Bill, 2018 in particular, has been a milestone given its crucial step towards the entry of the single currency for the EAC.  We look forward to working together with the Council of Ministers on other related legislation such as the EAC Financial Services Bill and the EAC Statistics Bureau Bill to anchor he foundation of this crucial pillar of integration.

The Assembly has similarly passed 4 Resolutions and a similar number of reports. In April 2018, the Assembly carried out an on-spot assessment of the region and the findings presented to the House in May 2018 reported developments and challenges in significant proportions. The positives realized include inter alia: evidence of commencement of the Single Customs Territory easing movement of goods through uniform external tariffs, procedures and documentation and the One Stop Border Posts which have enhanced the cross-border infrastructure and faster movement of citizens. The challenges that need address include removal of the Non-Tariff Barriers, speedy implementation of the decisions taken by the Council of Ministers and addressing general perceived mistrust and suspicion. EALA, shall do its part in tackling the challenges head-on.

Ladies and Gentlemen: I wish to reiterate the importance of strengthening the integration process if citizens are to reap maximum benefits. We are keenly observing the operationalization of the Single Customs Territory regime with a view that its full attainment shall enable us realize faster movement of goods.  We are also keen to see free movement of persons fully attained. We thank H.E. Uhuru Kenyatta who at his inauguration speech in November 2017, declared the borders of the Republic of Kenya open to all East Africans (and Africans). We implore the authorities to now move with haste to put in place the necessary legal framework, if at all, to support the same.

In order not to leave anything to chance, the Assembly has embarked on the pending work which was left unfinished by the 3rd Assembly and this runs concurrently with our initiatives as the 4th Assembly. We have re-doubled our efforts in order to catch-up with the lost time arising from the 6-month delay of the commencement of our tenure. In fact, between the last plenary in Dodoma, Tanzania, up until yesterday, both the Committee on Accounts and the Committee on General Purpose, have been meeting in Nairobi to look at the audited accounts for the last Financial Year and the 2018/19 budgeting process respectively.

We shall continue collaborating with all the Council of Ministers and other stakeholders to ensure the EAC bloc is strengthened. I wish again to thank you all and to welcome the Media to fully cover the EALA Plenary sittings during the two weeks. I thank you for your kind attention.