REPORT OF THE EAC HIGH LEVEL CONFERENCE ON TRADE INTEGRATION
HELD AT THE RADISSON BLI HOTEL, NAIROBI
FROM THE 25TH TO 27TH SEPTEMBER 2019

1. The conference was held to commemorate 20 years of the East African Community and 15 years of the East African Customs Union. The overarching goal of the conference was to have an open, honest and critical self-examination as a region, with regard to what has been achieved, what has worked and what needs to be done to move the regional integration forward as well as improving the EAC trade policy and other instruments. The outputs of the conference are key to making EAC an attractive investment bloc, boost industrialization, infrastructure development as well as embracing emerging technologies for economic development. The future of the EAC can only be assured if there is continued support by all Partner States, both at policy formulation and implementation levels. 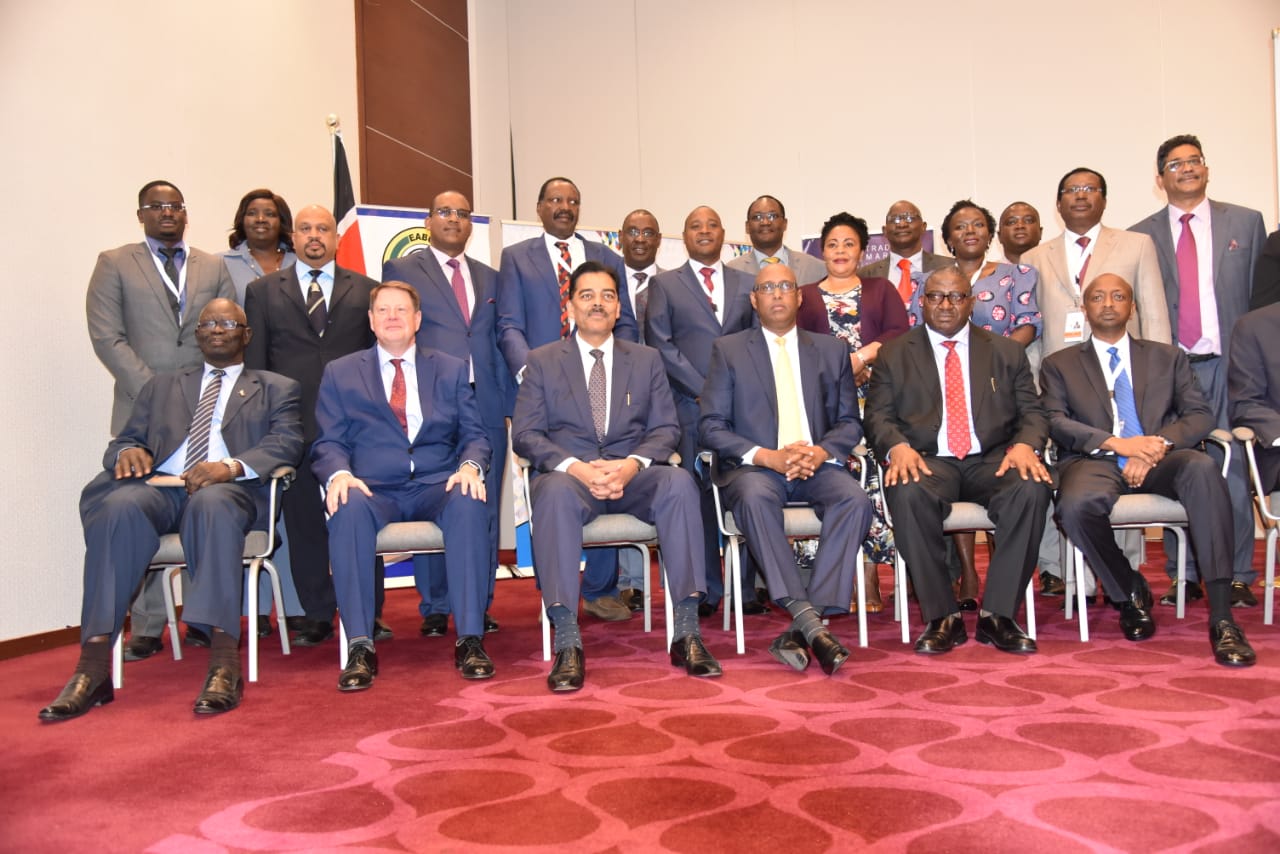 Addressing the participants, Kenya’s Cabinet Secretary for EAC and Regional Development, Mr. Adan Mohamed, said the region had made tremendous progress in the realm of trade facilitation including the transformation of Customs processes, the introduction of technology in driving regional business, re-orienting border operations under the coordinated border management concept, and re-engineering immigration procedures. All set for High Level Trade Integration Conference in Nairobi

East African Community Secretariat, 24th September, 2019: Nairobi: All is set for the High Level Trade Integration Conference that is due to take place from 25th to 27th September, 2019 at the Radisson Blu Hotel in Nairobi, Kenya.

Secretary in the Ministry of EAC and Regional Development, Dr. Margret Mwakima disclosed that the conference it was anticipated that the Conference would be attended by more than 300 key players from the East African region, International and Regional Economic Communities, exhibitors, stakeholders and Government officials. The main objective of the sub-committee meeting is to exchange ideas on various Trade Facilitation  activities being, undertaken by respective  RECs, as well as to ensure the proper coordination of projects, programmes and activities between the Customs Departments  of the RECs and the Customs Cooperation Division of the Commission.

The three-day meeting will also  provide updates with regards to the adoption of the AU Wide Trade Facilitation Strategy by the relevant Policy Organs of the AU. Furthermore, meeting will identify areas of cooperation, the form of cooperation and where possible, consider undertaking joint activities.

Speaking during the official opening session Director of Trade at the EAC Secretariat, Alhaj Rashid Kibowa said the sub-committee meeting on Customs Cooperation is an opportunity for AUC and RECs to strengthening cooperation on matters regarding Customs.

He urged the participants to discuss in details matters of  cooperation in Customs and come up with the way forward so as to enable proper coordination among the  RECs to avoid duplication and mainly to put in good use the limited resources available.

The 8th AUC/RECs Sub Committee Meeting on Customs Cooperation meeting is organized following  recommendations of the 7th AUC-RECs sub -committee held in Casablanca, Morocco in April 2018 in order to promote Trade Facilitation on the Continent.

During the 7th Meeting, the RECs presented  and shared respective areas of interventions. The 7th Meeting also considered the Draft African Union Trade Facilitation Strategy, which was subsequently presented for considering  by AUSCDGCs during their 10th Ordinary Session held in Moron,Comos in September 2018. 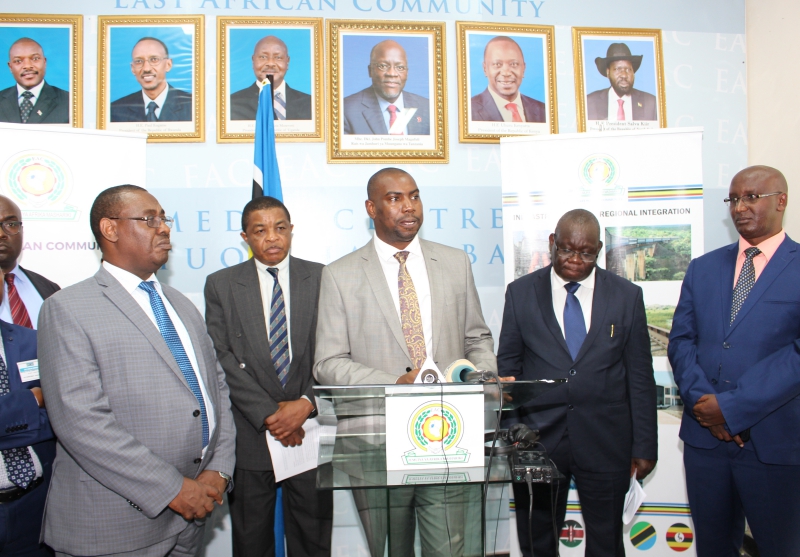 The operationalization and training of personnel at the OSBPs has significantly reduced the time taken by travellers and trucks at the borders from days to about 1.5 minutes to 30 minutes on average respectively.

The EAC with the support of TradeMark East Africa (TMEA) is finalizing the completion of the Malaba OSBP on the Kenya-Uganda border at a cost of US$7.5 million.

The Commissioner General of the Kenya Revenue Authority, Mr. John Njiraini, who briefed the media on behalf of his colleagues after a two-day meeting of the EAC Committee on Customs at the EAC Headquarters in Arusha, further said that TMEA was supporting the construction of OSBPs at Elegu/Nimule (Uganda/South Sudan Border), Tunduma’Nakonde (Tanzania/Zambia) and Moyale (Kenya/Ethiopia).

“We recognize that trade is global. Therefore, as much as we smoothen the flow of trade within the EAC, we intend to ensure the flow out and into EAC bourndaries with neighbouring countries is smoothened,” said Mr. Njiraini, who was flanked by among others Commissioner General Charles Kichere (Tanzania Revenue Authority) and Dickson Kateshumbwa (Acting Commissioner General, Uganda Revenue Authority), and Mr. Kenneth Bagamuhunda, the Director General, Customs and Trade at the EAC Secretariat.

Mr. Njiraini disclosed that in order to resolve the problem of lack of information to business, Trade Information Portals (TIPs) had been installed in Kenya, Rwanda and Uganda.

“Tanzania is in the process of establishing the trade portal. The TIPs will also be installed at a later stage in Burundi and South Sudan. The link of the EAC Trade Portal is http://tradehelpdeask.eac.int,“ said the KRA Commissioner General.

“We urge businesspoeple to start using these tools and propose how procedures can be simplified. It will be developed as a regional trade facilitation index given its ability to facilitate decision making and implementation of trade reforms,” he said.

The tax chiefs noted that the Single Customs Territory (SCT) had registered remarkable benefits since its implementation in July 2014.

On Non-Tariff Barriers (NTBs), the Commissioners General and Commissioners of Customs said that they were working closely to streamline the process of conducting trade in the region.

The Commissioners revealed that they were in the process of review the EAC Customs Management Act (EACCMA 2014) which has been in force since the commencement of the EAC in 2000.

“So far, the Partner States have submitted draft proposals which were considered in a meeting held on 31stJuly to 4thAugust, 2018. A lot of progress has been made through further inputs into the Partner States proposals as well as identification of new areas that require information of new regulations i.e. deployment of staff under the SCT, guidelines on the customs valuation of used items, additional export promotion schemes, and compliant trader programme,” they said.