URA clarification on the 'suspension' of Single Customs Territory 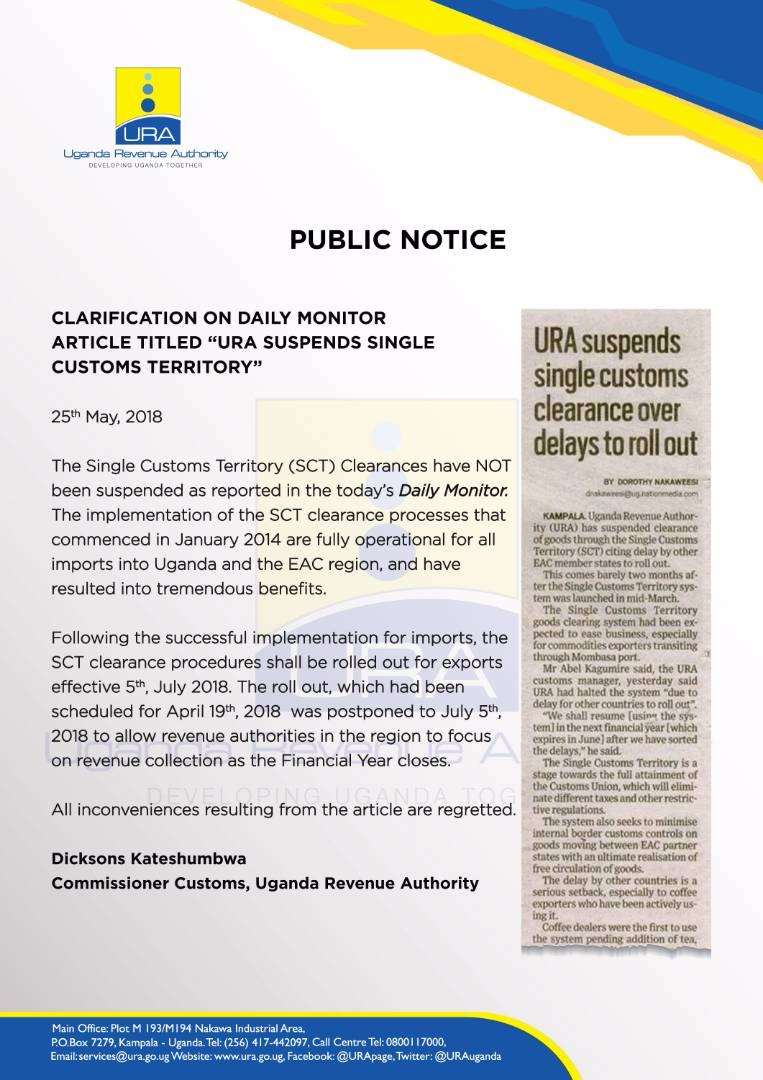 The Arusha Regional Commissioner, Mr Mrisho Gambo, has called for more sensitization on One Stop Border Posts (OSBP) to border communities in the East African Community in order to educate them on cross-border procedures under the OSBPs.

Mr. Gambo commended the establishment of the OSBPs which he said had made a big difference for citizens crossing national borders within the EAC by simplifying customs and immigration processes.

The Regional Commissioner made remarks over the weekend when he addressed thousands of border residents during a sensitization meeting on the OSBPs at Namanga town along the joint border of the United Republic of Tanzania and the Republic of Kenya. The sensitization forum which was organised by the EAC Secretariat with the support of the African Development Bank drew participation from residents of Arusha Region in Tanzania and Kajiado County in Kenya.

"The establishment of OSBP has tremendously promoted the movement of goods and services across borders and spurred intra-EAC Trade," added Hon Gambo.

On his part, the Kajiado County Commissioner, Mr. David Kipkemei, said one of the major non-tariff barriers impeding trade across the region was the lack of information, adding that traders struggle to find information regarding the goods and services allowed for trade in other Partner States.

Kipkemei said lack of information had left big loopholes for corruption to the detriment of traders as they endeavour to move their goods from one Partner State to the other.

He also commended the EAC Secretariat for conducting sensitization at the borders and called on Wananchi to embrace the education presented to them on the operations of OSBP to spur intra-EAC Trade.

The two leaders also took advantage of the gathering  to respond on the nagging border issues between Tanzania and Kenya. The decision to engaged wananchi at  the Namanga border on the challenges facing the two countries came after the agreement between Kenyan President H.E. Uhuru Kenyatta and his Tanzanian counterpart H.E. John Magufuli when they met in Kampala, Uganda in February 2018 and agreed that it was in the interest of both countries to solve the ongoing problems at the Namanga border.

The main objective of OSBPs is to facilitate trade and travel by reducing the number of stops made a border crossing thereby reducing the time required for clearance at the border. EAC embarks on Traning of One Stop Border Post Staff

The East African Community Secretariat has embarked on the training of officers from all state agencies and players operating on all One Stop Border Posts (OSBPS) in the region.

The first beneficiaries of the training were 30 officers and stakeholders at the Lunga Lunga/Horohoro OSBP on the border between Kenya and Tanzania.

Speaking when he opened the training workshop, Mr. Alfred Kitolo, Director of Productive and Services Sector at Kenya’s State Department of East African Community Integration said that the operationalization of the OSBPs would act as a catalyst in promoting trade and investments among EAC Partner States.

Noting that OSBPs will significantly alter the way business was conducted at the borders, Mr. Kitolo said that for OSBPs to operate effectively, it was important to involve traders, regular border post users and communities in the proximity of the border posts, adding that this would secure buy-in and ownership of all stakeholders.

Mr. Kitolo said it was expected that once border posts would improve efficiency by between 30% - 40% once became operational.

“The OSBPs also aim to improve on enforcement efficiency through cooperation, sharing of intelligence and better resource utilization. By working side-by-side, cooperation is enhanced and communication made easier,” said Mr. Kitolo, adding that the concept also provides for sharing of ideas, information and experiences.

“By way of example, the OSBP concept can be used to combat fraud by enabling easier and faster clearance of goods on the basis of a single customs declaration, thereby preventing the substitution of one set of documents with another,” he said.

The beneficiaries of the four-day training included officers from the departments of immigration, customs, police, wildlife service, directorate of criminal investigations, intelligence services, fisheries, agriculture and livestock, clearing agencies, port and plant health inspectorate services, and bureaus of standards from the two countries.

“We are training at least 30 for each of the 15 formal OSBP and train at least 30 OSBP facilitators through conducting training of trainers’ (TOT) sessions. We have already trained 12 officials through TOTs. We will also mainstream the OSBP training in the EAC training programme at the national level,” said Mr. Analo.

The OSBP training programme will be effected over a period of nine months stretching from October 2017 to June 2018.

“The objectives of OSBPs are to, among other things, achieve smoother flow of East African citizens across the region and facilitate by combining border clearance activities in a single location, reducing transit delays, simplifying clearance procedures, as well as fostering data and intelligence sharing,” said Mr. Analo.

Mr. Analo said that the EAC Secretariat has since 2016 been involved in the development of a harmonized training tool for the OSBPs.

“The objective of having one regional training tool is to create the same cadre of personnel in the six Partner States with the necessary skills and competencies to operationalize and manage OSBPs,” he said.

“Through common training, the officers from different backgrounds brought under roof through the implementation of the OSBPs can have the level of information, understanding and attitude and therefore able to work more smoothly and harmoniously,” he added.

The EAC regional training curriculum on OSBPs is the result of joint efforts between the Secretariat, Partner States and Development Partners, namely GIZ, TradeMark East Africa, International Organization for Migration and the Japan International Cooperation Agency.