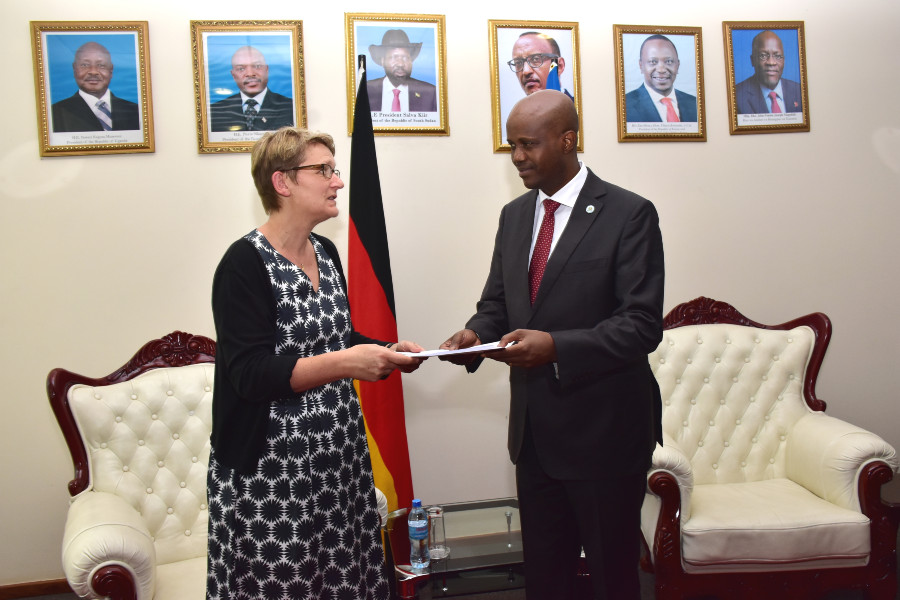 East African Community Secretariat; Arusha, Tanzania; 19th February, 2020 The Ambassador of the Federal Republic of Germany to Tanzania, Mrs Regine Hess, today presented her letter of credence to the Secretary General of the EAC Secretariat, Amb. Libérat Mfumukeko, to be accredited as the new German Ambassador to the EAC.

Mrs Hess had previously held diplomatic positions in the EAC Partner States of Uganda and Kenya and was accredited to the United Republic of Tanzania on 14th January, 2020. She is the first female German Ambassador to be accredited to the EAC.

The EAC and Germany have enjoyed long-standing and close relations, their joint development cooperation going back two decades. Commitments from the German Government to the EAC have to date mounted to over EUR 470 mill. (Approximately US$508 million). The joint cooperation focuses on the areas of economic and social integration as well as health.

Receiving the German Ambassador, EAC Secretary General Amb. Liberat Mfumukeko hailed the strong relations between the Community and Germany noting that Germany had provided generous technical and financial support to the EAC for decades.

‘’We have truly benefited from the German support which has catalyzed other Development Partners to support our projects and programmes,“ said the Secretary General.

Amb. Mfumukeko informed the Germany Ambassodor of the significant progress made by the EAC in the four pillars of integration namely the Customs Union, Common Market, Monetary Union and Political Federation, adding that the Community had made great strides in the four pillars due to political goodwill by the leaders of the Partner States.

On her part, the German Ambassador emphasized the importance of Germany’s support to the EAC Secretariat:

“Germany is a staunch believer in regional integration. We are convinced that further regional integration amongst the six EAC Partner States will be of great socio-economic and political benefit. The German Government remains committed in supporting the EAC Secretariat in the future,” said Mrs Hess.