Ireland’s Ambassador to Tanzania and the EAC, H.E. Paul Sherlock, further disclosed that his country would continue to promote trade and development cooperation between his country and the EAC. “Count on Brazil support because the goals of the Community are excellent for the prosperity of the people in the region”, asserted the Brazilian Envoy, adding that “regional integration initiatives take time but you need to continue so as to build a strong and powerful bloc”.

He hailed the EAC as one of the fastest growing RECs in the world and said Brazil and the Southern American Common Market (MERCOSUR) of which Brazil is a member had a lot to learn from the EAC.

While receiving the Brazilian Ambassador, the EAC Secretary General hailed the existing cordial relations between the EAC and Brazil. He welcomed the support from the Brazil Government geared towards enabling the Community to achieve its ambitious agenda.

The Secretary General briefed him  on the progress being registered by the Community so far that include implementation of Protocols on the Customs Union, Common Market,  East African Monetary Union and Political Federation.

Amb. Mfumukeko further disclosed that the EAC Partner States had started  drafting  Constitution for EAC Confederation which is the model for a Political Federation that had been adopted by the Heads of State Summit.

He informed the Brazilian Ambassador that the EAC has  close working relationships with other RECs in Africa which are all geared towards promoting the African Union's vision of an African Economic Community.

Present at the accreditation occasion were the EAC Deputies Secretary General in charge of Planning and Infrastructure, Eng. Steven Mlote and  Hon. Christophe Bazivamo of the Productive and Social Sector. 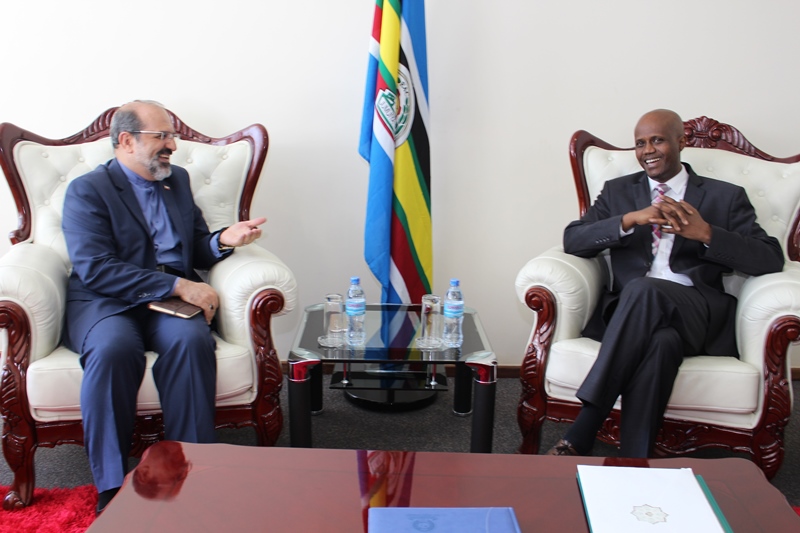 Welcoming the Egyptian Ambassador, the Secretary General briefed him on the current achievements in the pillars of the regional integration and development process. He  described Egypt as an important trading partner for the EAC and praised its outstanding role in promoting negotiations for the Tripartite Free Trade Area (FTA) between the EAC, COMESA and SADC.

Amb. Mfumukeko and the Egypt envoy discussed several issues including the status of the EAC-EU Economic Partnership Agreements (EPAs) and also explored areas of collaboration in trade and investment.

The Iranian envoy expressed delight at the accreditation commenting that Iran has very good relations with the EAC member states.

“In spite of the good relations between the  Islamic Republic of Iran and the EAC Partner States, I believe a lot of the potential has not yet explored noting that untapped opportunities abound in trade and investment’’, remarked H .E Farhang

Amb Mfumukeko on his part, informed the Iranian Envoy that EAC is open to investment  in areas of  infrastructure, especially in roads, railways, ports and energy as well as  technical and financial support from the  Islamic Republic of Iran.

Also present at the accreditation ceremonies was EAC Deputy Secretary General  in charge of Political Federation, Mr. Charles Njoroge and  officials at the EAC Secretariat. Amb Van Acker presented his letter of credence to EAC Secretary General, Amb Liberat Mfumukeko, during a brief  ceremony held at the EAC headquarters in Arusha.

Amb. Van Acker said that his appointment was out of his government’s commitment to deepen its cooperation with the EAC, noting that the significance of regional integration is not only for East Africans, but also  an important source of growth for the continent as well.

The Belgium envoy expressed delight at the accreditation commenting that Belgium has very good relations with the EAC member states.

In his remarks, the EAC Secretary General, Amb Liberat Mfumukeko warmly welcomed the Belgium Envoy to the EAC and briefed him on the current achievements in the pillars of the regional integration and development process.

He noted that Belgium has an intimate knowledge of the region and added that the EAC is looking forward to scaling up cooperation with the country.

Meanwhile, the EAC Secretary-General Amb. Liberat Mfumukeko received the Mission Director for the  United States Agency for International Development (USAID)  Mr. Mark Meassick who paid a courtesy visit to him at the EAC Headquarters.

In receiving the Mission Director, Amb Mfumukeko thanked USAID for its continued support and strong partnership. Reiterating on the importance of regional integration as a means to access regional markets and gain competition advantages in efficiency and productivity outputs.

“These elements can only be realised by having no restrictions on the movement of goods, services, labour and capital within the East Africa“noted Amb. Mfumukeko

Speaking during the discussion Director  Meassick acknowledged the efforts that the Community has made to access trade, adding that “this has not only promoted prosperity in those regions, but has also delivered better livelihoods to their communities, thus putting EAC in the forefront as a model for Integration“. In the Ambassador’s accreditation letter dated 10th October, 2018, and addressed to the Secretary General, the Japanese Minister of Foreign Affairs, Mr. Tano Kono, appoints Amb. Shinichi Goto as the Japanese representative to the EAC.

During their discussion, the Secretary General briefed Amb. Goto on the current achievements on the pillars of the regional integration and development process. He said the Community had expanded tremendously within a short spell of time,a development which has necessitated the Community to review its institutional set-up.

Amb. Mfumukeko further informed the Japanese envoy on the status of the Tripartite agreement between EAC, COMESA and SADC. They also discussed potential areas for collaboration between Japan and the EAC on trade and investment.

In his remarks, Amb. Goto  hailed the Secretary General for the good work in deepening the regional integration agenda. He said achieving the Customs Union, Common Market and a Monetary Union within such a short time for the Community was commendable.

Also present at the accreditation ceremony were the EAC Deputy Secretary General in charge of Planning and Infrastructure, Eng. Steven Mlote.

In order to support promotion of the Jua Kali/Nguvu Kazi sector of the regional economy, the EAC Secretariat in collaboration with the Partner States and Confederation of Informal Sector Organization East Africa (CISO-EA) has organized the annual exhibition since 1999.  The exhibitions have proved to be strategic avenues for promoting the Small and Micro Enterprises sector’s products, transfer of technologies, and promotion of the regional integration process.