Kenya lies astride the equator, extending from the Indian Ocean in the east to Uganda in the west and from the United Republic of Tanzania in the south to Ethiopia and Sudan in the north. On the east and north-east, it borders Somalia.

Kiswahili and English are official languages. Each of the ethnic groups has its own language.

Religious and other festivals whose dates vary from year to year include Good Friday, Easter Monday and Eid al-Fitr (End of Ramadan, three days).

61,950 km of roads, 14% paved, and around 1,920 km of railway. The main railway line runs between Mombasa and Nairobi, and branch lines connect with Taveta on the Tanzanian border in the south and Kisumu on Lake Victoria in the west.

Mombasa is the chief port for Kenya and an important regional port, handling freight for and from Uganda, Rwanda, Burundi and the Democratic Republic of Congo, including a substantial volume of food aid. Ferries ply the coast between Mombasa, Malindi and Lamu.

Kenya is a member of the African, Caribbean and Pacific Group of States, African Union, Common Market for Eastern and Southern Africa, The Commonwealth, Indian Ocean Rim Association, Non-Aligned Movement, United Nations and World Trade Organization. Kenya is also a member of the Intergovernmental Authority on Development, which was established in 1986 by the 6 countries in the Horn of Africa to combat drought and desertification and promote food security in the region.

There are 4 main regions. The north-east plain is arid. The south-east region is fertile along the Tana river, in the coastal strip and in the Taita Hills, which rise to 2,100 metres. The north-west is generally low-lying and arid but includes Lake Turkana, 260 km long, and many mountains, including Nyiru (2,800 metres). The south-west quarter, a plateau rising to 3,000 metres, includes some of Africa’s highest mountains: Mount Kenya (5,200 metres), Mount Elgon (4,320 metres) and the Aberdare Range (4,000 metres). The Great Rift Valley runs across the plateau from north to south, 50-65 km wide and 600-1,000 metres deep. West of the Rift the plateau falls to Lake Victoria and eastward the rivers Tana and Athi (or Galana downstream) flow into the Indian Ocean.

The coastal areas are tropical, with monsoon winds. The lowlands are hot and mainly dry. The highlands are much cooler and have 4 seasons.

The most significant issues are water pollution from urban and industrial wastes; degradation of water quality from increased use of pesticides and fertilisers; water hyacinth infestation in Lake Victoria; deforestation; soil erosion; desertification; and poaching.

Thornbush and grassland are characteristic of much of the country. Varied forest covers about 13,000 sq km of the south-west quarter, at 2-3,500 metres above sea level. Forest covers 6% of the land area, having declined at 0.3% p.a. 1990-2010. Arable land comprises ten per cent and permanent cropland one per cent of the total land area.

Kenya’s wildlife is probably the most famous in the world. Wild mammals include lions, leopards, cheetahs, zebras, antelopes, gazelles, elephants, rhinoceroses, hippopotami, baboons and many kinds of monkeys. There is a rich variety of native birdlife and migrant birds visit the country, which breed in Europe. Wildlife is protected in reserves extending to 45,500 sq. km, or some 8% of the total land area. 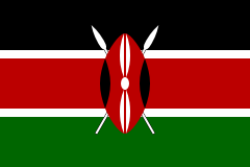 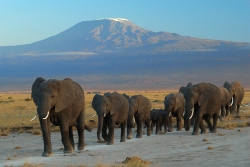