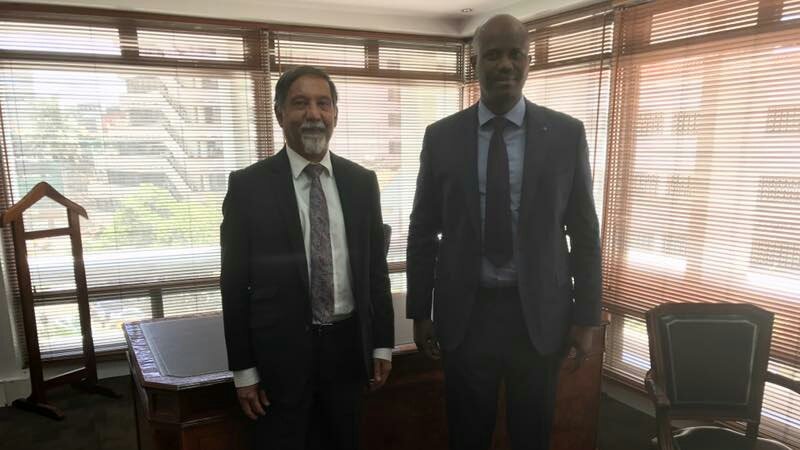 Amb. Mfumukeko had also requested capacity building support from His Highness the Aga Khan to the East African Community through scholarship programmes to enhance capacity of staff in different projects and programmes.

The two officials discussed in detail the Financing Agreement signed recently between the Aga Khan Development Network (AKDN) and the French Co-operation Agency (AFD) for the expansion of hospitals in Kisumu and Mombasa worth USD28 Million. Another Financing Agreement to expand the Aga Khan hospital in Dar es Salaam, Tanzania, had already been signed and implementation is on-going.

In Investment Promotion Service (IPS), especially in the areas of Agro-processing by the Aga Khan, Dr. Lakhani informed the Secretary General that currently, AKDN had an Export Agro-processing industry to empower rural areas from production to export. This is already being implemented in Kenya with a programme of 7,000 farmers involved through Premier Food Inc (food processing); Frigoken (vegetable processing) and All fruit (fruits processing), amongst others.

The Secretary General urged AKDN to ensure similar programmes are replicated in other EAC Partner States. In this regard, it was agreed that an EAC Delegation would visit the AKDN Food Processing Plant in Ruiru and Murang’a in Kenya with a view to rolling it out to other Partner States.

The East African Community and Aga Khan Development Network have a Memorandum of Understanding signed in 2012 specifying the areas of cooperation.  The areas include the following, amongst others:

(i) Poverty reduction, employment creation and income generation programmes in selected regions of the EAC Partner States through stronger regional and local markets by investing in infrastructure, social and educational enterprises, media and communications, financial services, among others;

(ii) Enhancement of quality standards in the fields of education and health through public-private-partnerships and establishment of Centres of Excellence;

(iii) Promotion of the expansion of the Aga Khan University in East Africa through various campuses; and

(iiii) Creation and promotion of mechanisms for common accreditation in EAC for professional and institutions, especial in the domain of education and healthcare. 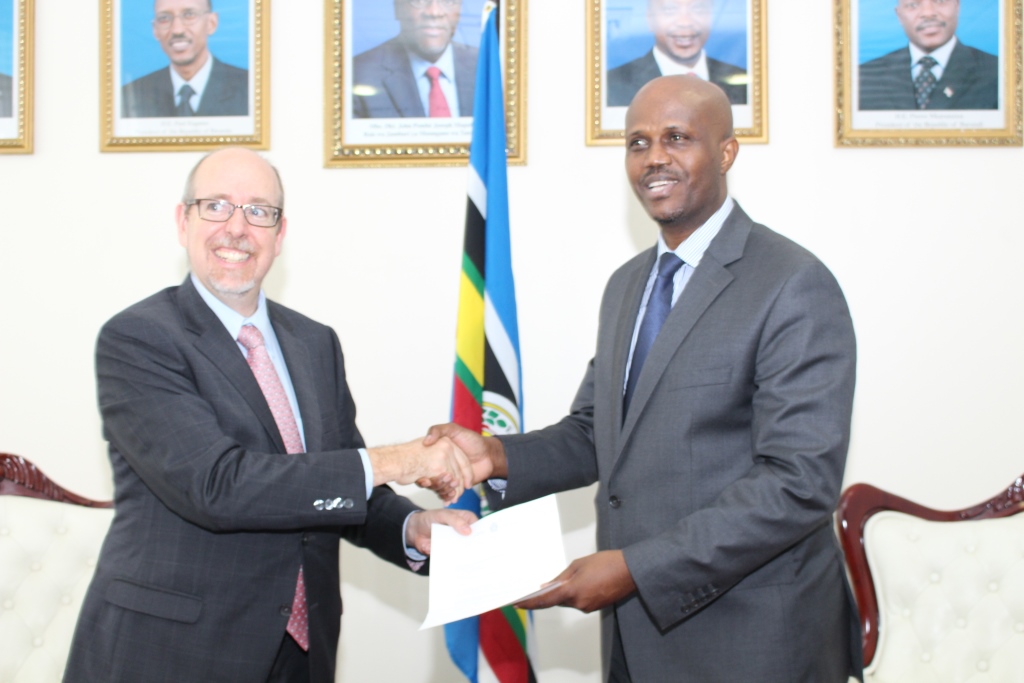 The Canadian High Commissioner to the United Republic of Tanzania, His Excellency Ian Myles, today presented accreditation letter to the East African Community Secretary General, Amb. Liberat Mfumukeko appointing him as his country’s representatives to the EAC bloc.

While receiving the Canadian envoy, Amb. Mfumukeko hailed the existing cordial relations between the EAC and Canada. The Secretary General welcomed support from the Canadian government geared towards enabling the Community to achieve its ambitious agenda.

The Secretary General briefed H.E. Myles on the current achievements in the pillars of the regional integration and development process. He said the Community had expanded tremendously within a short spell of time which has necessitated a review of its institutional set-up and work on a sustainable financing mechanism.

Amb. Mfumukeko and the Canadian envoy discussed several issues including the status of the EAC-EU Economic Partnership Agreements (EPAs) and the Inter-Burundi Dialogue. They also explored areas of collaboration in trade, investment and agro-processing.

The Secretary General also informed the High Commissioner on his priorities over the next four years which include: increasing investment for job creation, and; improving agriculture to ensure food security and job creation for the youth in East Africa.

On his part his, H.E. Myles told the Secretary General that his government attaches great importance to regional economic groupings such as the EAC. He commended the Secretariat for the role it is playing in promoting regional integration. 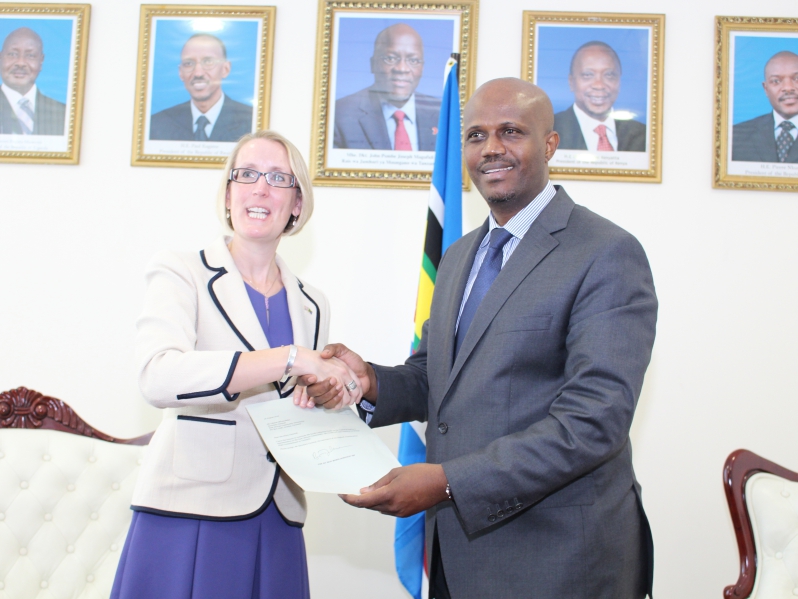 The United Kingdom will strengthen trade and investment links with the East African Community Partner States for mutual benefit.

UK High Commissioner to the United Republic of Tanzania and the EAC, Her Excellency Sarah Cooke, said that her country would remain an outward-focused trade-based economy with strong partnerships with other countries and regional economic blocs even in the wake of Brexit.

Ms. Cooke said the UK would create new partnerships with the EAC aimed at promoting private sector-led economic growth for employment creation and poverty reduction in the East African region.

The envoy disclosed that the UK was the biggest contributor to TradeMark East Africa (TMEA), adding that the funding to TMEA was being utilised to finance technical assistance to the EAC in sectors such as customs, trade, investment and video teleconferencing.

The High Commissioner made the remarks when she presented her credentials to the EAC Secretary General, Amb. Liberat Mfumukeko, at the EAC Headquarters in Arusha, Tanzania today.

Ms. Cooke hailed Amb. Mfumukeko for his efforts in strengthening efficiency and reforming public expenditure within the EAC.

In his remarks, Amb. Mfumukeko thanked the UK for its generous support to the EAC over the years singling out the TMEA funding which he said had resulted in numerous benefits to the Partner States especially in revenue collection and investment promotion.

Amb. Mfumukeko said his priorities over the next four years would be to: promote the free movement of persons and labour as enshrined in the EAC Common Market Protocol; increase investment for job creation, and; improve agriculture to ensure food security and create employment for the youth in East Africa.

TMEA is an East African not-for-profit company established in 2010 to support the growth of trade – both regional and international – in East Africa. TMEA is focused on ensuring that gains from trade result in tangible gains for East Africans.

The Envoy (Roberto Mengoni), who is also the Italian Ambassador to the United Republic of Tanzania, presented his letter of accreditation signed by the Italian Minister for Foreign Affairs and International Cooperation, Hon. Paolo Gentiloni, to the EAC Secretary General, Amb. Liberat Mfumukeko, today at the EAC Headquarters in Arusha, Tanzania.

Welcoming Amb. Mengoni to the EAC Headquarters, the Secretary General commended the Italian Government and people for showing interest in furthering the existing cooperation between Italy and the Community.

Amb. Mfumukeko briefed the Envoy on the key millstones recorded in integration process and pledged to link up the envoy with the the East African Business Council through which Italian investors could explore available opportunities.

On his part, Amb. Mengoni commended the EAC Secretariat for spearheading the integration agenda and highlighted a few areas that the Italian Government was interested in supporting the EAC, especially the Renewable Energy sector. He disclosed that his government was pushing for a policy change on Africa that will see a more robust engagement with the continent and the EAC.

Amb. Mfumukekeko and his guest also discussed also the status of negotiations of the EAC-EU Economic Partnership Agreement and the Inter-Burundi dialogue. With regard to the Inter-Burundi Dialogue, Amb. Mengoni hailed the efforts of the Facilitator, H.E. Benjamin Mkapa, and the EAC Secretariat in spearheading the process and called upon all the parties and stakeholders to give peace a chance in Burundi.

Also present at the ceremony was the EAC Deputy Secretary General in charge of Productive and Social Sectors, Hon. Christophe Bazivamo.