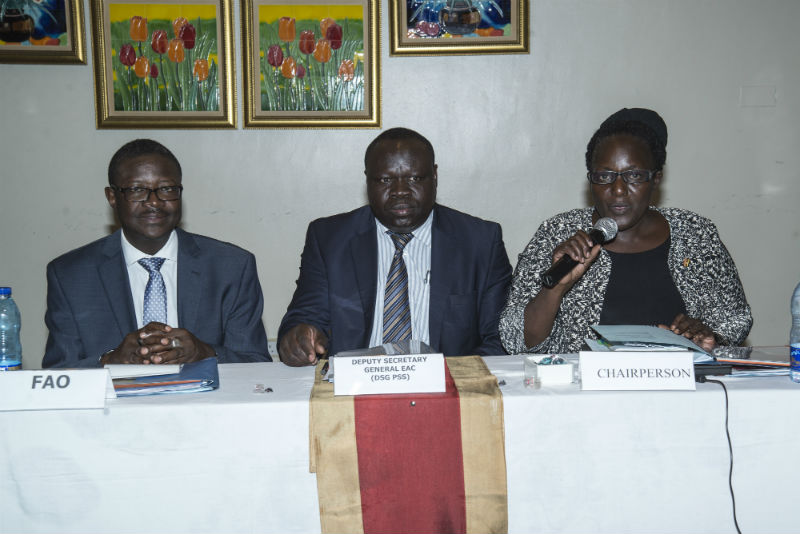 Inception Workshop for Youth Employment in Agriculture kicks off in Dar

A regional inception workshop to launch the joint East African Community (EAC) and Food Agriculture Organization (FAO) Project on Youth Employment in the Agricultural Sector in the EAC kicked off in Dar es Salaam, Tanzania.

Presiding over the opening session, Hon Christophe Bazivamo, the EAC Deputy Secretary General (DSG) in-charge of Productive and Social Sectors noted that the youth constitute the largest segment of the population across the EAC.

Hon. Bazivamo, however, said that economic growth within the Partner States was not generating enough jobs especially for the region’s ballooning number of young men and women.

“Rural poverty and food security remain persistent and are linked with this problem of jobless growth,” said Hon. Bazivamo.

The DSG informed the meeting that EAC with financial and technical support from the FAO had prioritized the promotion of youth employment in the agricultural sector as one of the Community’s flagship initiatives.

“This will be pursued under a Technical Cooperation Project (TCP) on Promoting Youth Employment in the Agricultural Sector in the EAC. The overall objective of the TCP is to contribute to reducing rural poverty and boosting economic growth by supporting the creation of better opportunities for youth in the agricultural sector,” said the DSG.

The DSG said it was unfortunate that Africa spends over $35 billion on food imports, which is a huge economic burden.

“Unless the current trend is reversed, Africa will spend $110 billion on food imports by 2025. The amount of money channeled to imports could make a big impact if invested to promote agricultural production and productivity,” he said.

He identified post-harvest food loss as one of the largest contributing factors to food and nutritional insecurity in Africa with more than 30 per cent of food produced for human consumption being lost or wasted through post-harvest losses, adding that the youth if supported could transform post-harvest losses into investment opportunities through value addition and agro-processing ventures.

The DSG urged EAC Partner States to look at agriculture in a multi-sectoral perspective, noting that Inclusive agricultural growth and transformation calls for an integrated approach.

He said that infrastructure development is critical for catalyzing transformation of the agriculture sector.

“The lack of infrastructure drives up the cost of doing business and also discourages the private sector from investing in agricultural value chains. Linkages with agro- industrialization fundamental. For instance agroprocesing would help stimulate production by expanding and enhancing access to markets.”

The DSG emphasized the need to identify youth involved in transformational agricultural initiatives so that they are recognized and rewarded, noting that this would motivate more young people to recognize that investing in agriculture was a highly profitable initiative.

Speaking at the event, Dr Patrick Kormawa, the FAO Sub-regional Coordinator for Eastern Africa and FAO Representative to the African Union and the UN Economic Commission for Africa, highlighted the worrying demographic trends in the EAC.

Dr. Kormawa noted that the EAC was becoming home to an increasingly young population.

“In 2010, East Africa’s youth accounted for 45% of the total population. This number continues to grow and it is estimated that 75% of East Africa’s total population will be under the age of 34 in 2030,” said Dr. Kormawa, adding that true rural transformation cannot be accomplished in the EAC without empowering the youth as actors of change. 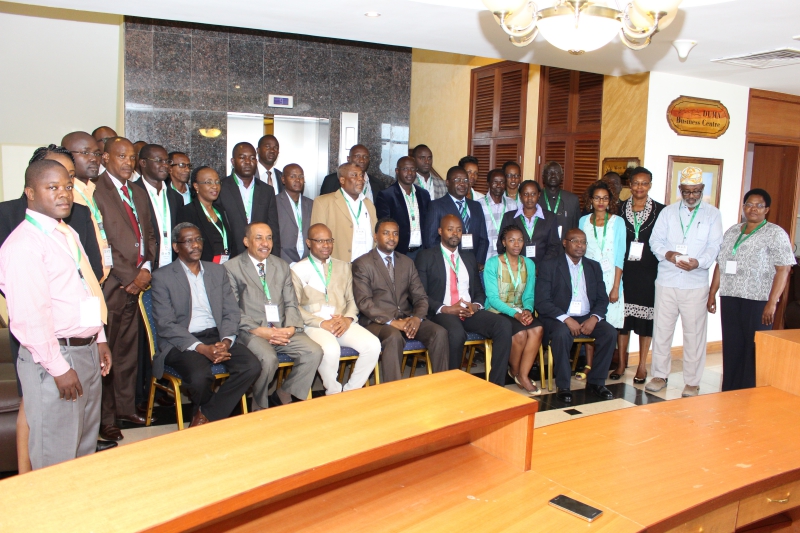 Regional Training on Malabo Declaration on Agriculture begins in Arusha

African countries have been called upon to develop the necessary tools to ensure the implementation of the June 2014 African Union Heads of State Malabo Declaration on Agriculture Growth and Transformation in Africa.

Mr. Mbosonge Mwenechanya, the Comprehensive African Agriculture Development (CAADP) Focal Point at the Common Market for Eastern and Southern Africa (COMESA), said that African governments need to know where their countries were on the implementation of the Malabo Declaration and why.

Mr. Mwenechanya said that agriculture was the engine of economic growth, development and transformation for most African countries, adding that without visionary leadership, African agriculture would suffer.

Mr. Mwenechanya said that agriculture provides the most diverse base for industrialization and the biggest potential for poverty reduction and employment creation in Africa.

He said that within the COMESA region, for instance, agriculture is the source of 50% of the raw materials for industry and employs 70% of the workforce.

Mr. Mwenechanya was addressing delegates during the opening session of a five-day regional training workshop on the preparation of the Biennial Report on the Malabo Declaration in Arusha, Tanzania.

In his remarks, the EAC Deputy Secretary General in charge of Productive and Social Sectors, Hon. Christophe Bazivamo, said that the EAC had made steady progress in embracing the CAADP agenda.

In a speech read on his behalf by the Director of Productive Sectors, Mr. Jean-Baptiste Havugimana, Hon. Bazivamo disclosed that the EAC had realized steady progress with the support of the African Union Commission, NEPAD and USAID.

“The EAC Secretariat is working closely with Partner States and has developed key CAADP instruments including the EAC CAADP Compact and Results Framework. A draft Regional Agriculture Investment Plan (RAIP) has been developed and is currently undergoing validation at the national level in the EAC Partner States,” said Hon. Bazivamo.

The Comprehensive African Agriculture Development Programme (CAADP) is Africa’s policy framework for agricultural transformation, wealth creation, food security and nutrition, economic growth and prosperity for all. In Maputo, Mozambique, in 2003, the African Union (AU) Heads of Summit made the first declaration on CAADP as an integral part of the New Partnership for African Development (NEPAD).

The AU Summit of June 2014 gave renewed legitimacy and mandate to CAADP as Africa’s policy framework for agriculture growth and transformation for shared prosperity – the Heads of State adopted the Malabo Declaration on Accelerated Agricultural Growth and Transformation for Shared Prosperity and Improved Livelihoods.

The Food and Agriculture Organization (FAO) of the United Nations and the East Africa Community (EAC) have signed a Grant Agreement intended to promote urban and rural agriculture and agribusiness to improve youth employment in the region. The total budget of the Grant is US$ 440,000 for one year.

The agreement, which took place on the margins of the 28th African Union Summit themed “Harnessing Africa’s Demographic Dividend by Investing in Youth”, was signed by Amb Libérat Mfumukeko, the Secretary General for EAC and Dr. Patrick Kormawa, the Subregional Coordinator for Eastern Africa and FAO Representative to the AU and UN Economic Commission for Africa. The EAC Deputy Secretary General for Political Affairs, Mr. Charles Njoroge accompanied Amb. Mfumukeko during the brief ceremony held at the AU Headquarters.

The agreement allows FAO and EAC to find a path for young people to secure decent work opportunities, as well as explore innovative e-business models in the agricultural sector.

Amb. Mfumukeko in his remarks highlighted the positive impact of the agreement by saying “the cooperation with FAO was long overdue, and the current support will go a long way in addressing pertinent issues in East Africa where agriculture is the way of life.”

Despite relatively high economic growth in the Partner States of the East African Community (EAC), youth unemployment remains a great concern for the region, as it slows down economies and causes social problems.

The two institutions have the tools to respond to unemployment in the EAC region. FAO has developed the expertise on youth, agriculture, livelihoods and migration.  EAC, on its part, has prepared its Youth Policy, a corner stone for many emerging public and private initiatives.

Dr. Kormawa, in his address, emphasized the role of the partnership on youth “This Technical cooperation project (TCP) addresses one of the most pressing issues of job creation for youth in the sub region, we at FAO believe that youth employment in agriculture and agribusiness is a way of lifting a significant number of youth out of unemployment and poverty”, he stated.

The agreement aims to enhance the capacity of the target countries and the EAC Secretariat to develop and implement youth-in-agriculture initiatives and to improve the East African youth’s access to information, resources and employment opportunities in the agricultural sector.

Key activities of the new intervention would include the development of a sub-regional strategy and country action plans for promoting decent employment for youth in the agricultural sector; the elaboration of a framework for sustainable youth employment initiatives, the dissemination of best practices, business models and opportunities for youth, and the support to scaling e-business models in agriculture.